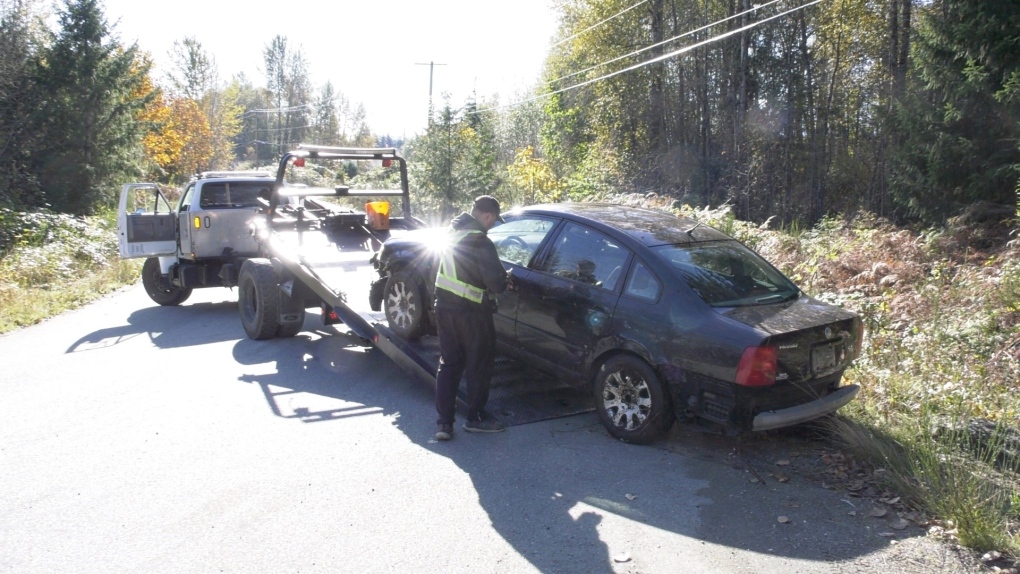 A 21-year-old woman survived a crash but spent a long, cold night trapped in her vehicle just outside Courtenay Wednesday evening. (CTV)

CUMBERLAND, B.C. -- A 21-year-old woman survived a crash but spent a long, cold night trapped in her vehicle just outside Courtenay Wednesday evening.

Police were called to the report of a vehicle discovered deep in a wooded area off Cumberland Road part-way between Courtenay and Cumberland on Thursday morning.

"We received a call at about 11:05 (a.m.),” says Comox Valley RCMP spokesperson Const. Monika Terragni. “I guess a passerby saw the light reflecting from her vehicle and decided to stop and saw that there had been a crash there in the area."

Terragni says the driver of the Volkswagen Passat told police she missed the curve along Cumberland Road and ended up going over an embankment and into the forest.

While she didn't sustain any injuries, the woman was trapped inside the vehicle because it had ended up on its side, Terragni says, adding that the woman couldn’t call for assistance because her cell phone was dead.

"Seemingly, there were no injuries that were visible at the scene, but she was (able) to get medical attention just in case," Terragni says.

Terragni says the crash should serve as a caution to other drivers about the change in driving conditions.

"She was driving, it was late at night, it's getting cold now, the weather is changing, those roads might ice over, maybe she slid a little bit," Terragni says.

While attending the crash scene, police also spotted an old safe that had been abandoned in the bush, which appeared to have been possibly stolen. It was cracked open, but had a chain wrapped around it as if it had been pulled out of a secure location.

Police say alcohol and drugs are not being considered as factors in the crash.