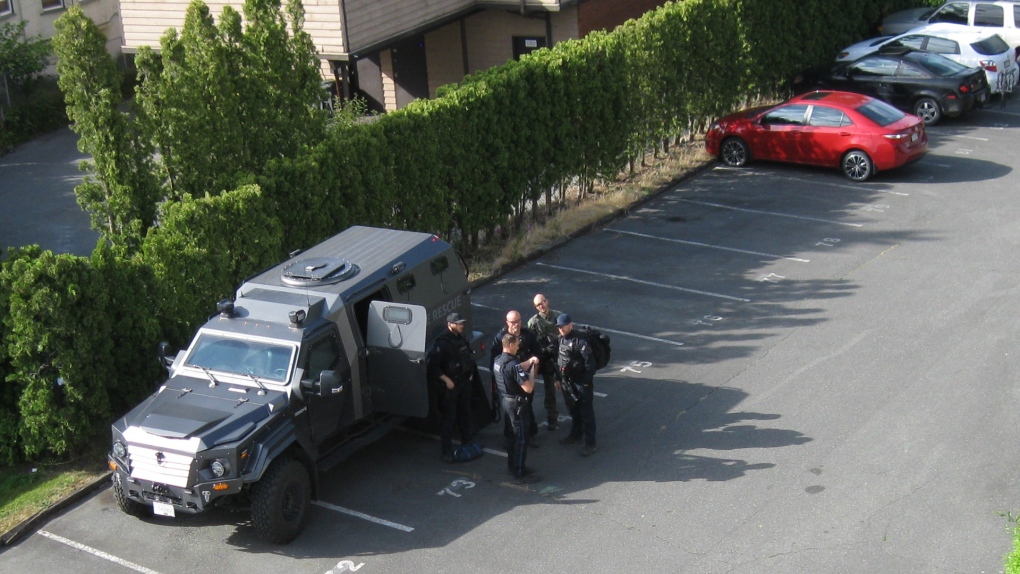 Officers with the Greater Victoria Emergency Response Team are at the residential complex on Eldon Place. (Bill Williamson)

VICTORIA -- Heavily-armed police descended on an apartment building in Saanich Monday morning after police received reports of a distraught woman.

The call came in around 7:15 a.m. and police say they were concerned that the woman may pose a danger to herself or others.

According to the Saanich Police Department, the woman had allegedly made threats to burn down the building and had “incendiary devices” in her possession.

She also reportedly made threats to people in the building.

Officers with the Greater Victoria Emergency Response Team then attended to a residential complex on Eldon Place, near Burnside Road.

Saanich and Victoria police were also on scene, along with crisis negotiators. The Saanich Fire Department was also on scene.

Police say that since May, officers have responded to nearly 40 calls o fa similar nature involving the same woman.

While officers were present, the woman could be seen and heard yelling at police from a third-floor balcony of the building at 3225 Eldon Pl.

Police say that negotiation attempts were made for several hours, but were unsuccessful.

A tenant in the building told CTV News that police told her to remain inside her unit while they dealt with the call.

Police say that at approximately 12:30 p.m., after repeated requests for the woman to exit her suite, officers decided to deploy tear gas in the unit.

The woman could be seen moving from inside her suite to her balcony, where she was coughing.

Shortly after, police took her into custody under the Mental Health Act.

The woman, 37, was then taken to an ambulance, where she received medical attention. Police say that she “did not receive any injuries” during the arrest and was accompanied by officers to the hospital.

“Police are still investigating the criminal charges in this case as they continue to gather information from the residents of this building and the events that transpired,” said Cst. Markus Anastasiades, Saanich Police.

“Police have responded to almost 40 calls for service involving this woman since May of this year, almost all of which have been related to checks on her mental health. The use of any force option is a last resort for police and can be applied in situations where communication is not effective and safety concerns exist,” he said.

Police say that the investigation is ongoing, but they are considering recommending charges of mischief, uttering threats and possession of a weapon for a dangerous purpose.