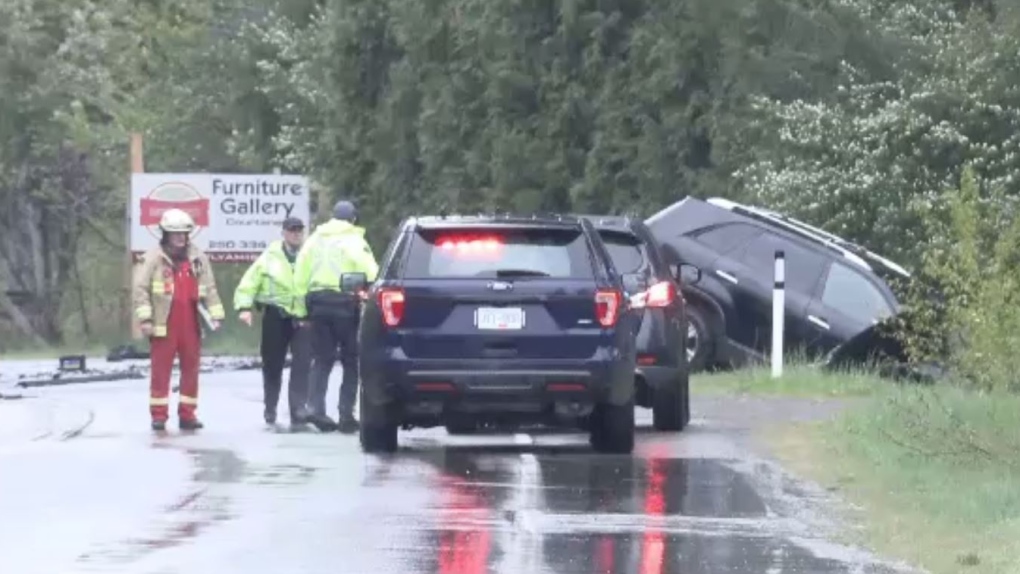 A 29-year-old woman has died as the result of a serious crash on Highway 19A in the Mid-Island community of Merville on Wednesday afternoon.

The crash occurred just north of the Merville General Store, between Courtenay and Campbell River.

Const. Dave Dormuth of Island Traffic says police responded to calls about the crash at 3:54 p.m. Dormuth was performing traffic enforcement a short distance away on Hamm Road at the time and was on the scene within minutes.

“We had Oyster River Fire Department, BC Ambulance and RCMP attend and it was determined at that time we had a single female occupant in one of the vehicles (who) was deceased on scene,” Dormuth says.

Dormuth says the woman was travelling north on the highway when her vehicle was struck by a southbound vehicle being driven by a 20-year-old man.

He says early indications are that the man’s vehicle may have crossed the double solid line and struck the other vehicle.

Two vehicles collided, causing one car to end up partially in a ditch, while the second vehicle fell fully into a ditch on its side.

"When we arrived on scene, there were two cars in the ditch. We had to stabilize one for the safety of everybody who's around it, and one patient has been transported by BC Ambulance, and the scene has been handed over to the RCMP for an investigation," says Deputy Fire Chief Martyn Thomas of the Oyster River Fire Department.

Thomas says road conditions were dry when the crash occurred, but a heavy rain fell afterwards. He said first responders have attended many crashes along this section of highway.

"This section of the highway seems to be particularly bad for this," Thomas says.

A roughly 3.3-kilometre stretch of the highway between Merville Road and Howard Road was closed in both directions on Wednesday afternoon, according to DriveBC.

A detour was set up at those two streets, according to the organization.

That didn't stop one driver from trying to skirt around the roadblock though.

She drove around devices that had been set up at the Merville Store to prevent vehicles from travelling north and ended up at the crash scene, where she was stopped and questioned by RCMP.

Police would not confirm if she received a ticket, but say the fine for disobeying a traffic control device is $98.

Dormuth says he expects to retrieve dashcam video from a vehicle that was travelling behind the woman’s car when it was struck. He says the occupants of that vehicle stopped at the scene to attempt to perform CPR on the 29-year-old.

Both drivers are believed to be from the Comox Valley area.