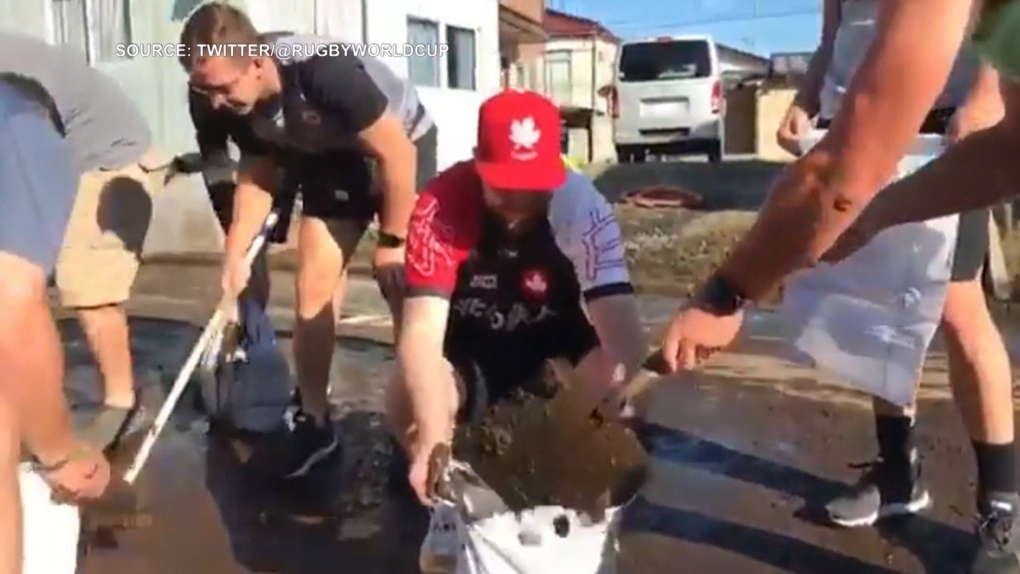 With no game to play and a mess around them in Kamaishi left by the typhoon, about 15 Canada players and staff grabbed shovels and brooms to sweep mud and debris off roads, and even from inside residents' homes. (@Rugbyworldcup/Twitter)

The storm cancelled three games in the tournament, but those were far from the most significant casualties. As many as 33 people died and countless more faced flooding and wind damage from the powerful tropical cyclone.

The cancellation of Canada's final Pool B match means the team will finish the world cup winless for the second straight tournament. Coach Kingsley Jones told the Canadian Press his team was disappointed not to be able to play, given that the opponent represented the team's best chance for a win in a group that included traditional powers New Zealand, South Africa and (to a lesser extent) Italy.

"The fact that the game was cancelled was really devastating news, to be honest," said Rugby Canada spokesperson Gareth Rees.

Rees told CTV News Vancouver Island the team had planned to return home Monday, the day after the Namibia match.

With no game to play and a mess around them in Kamaishi left by the typhoon, about 15 Canada players and staff grabbed shovels and brooms to sweep mud and debris off roads, and even from inside residents' homes.

"We had nothing to do on that last day, so we reached out and saw if there was anything we could do to help," Rees said. "It turned out to be a really incredible experience in the end."

The Canadian team's efforts caught the attention of world cup organizers, who tweeted a video of the players' efforts.

Following the cancellation of their match in Kamaishi, @RugbyCanada players headed out to help with recovery efforts, showing the true values of the game.

Amazing scenes and brilliant to see from the team. #RWC2019 pic.twitter.com/jdXQlyD2ZM

“In times like this there are an awful lot more important things than rugby, and when we got here we saw people's houses absolutely destroyed, water (rising) up the walls,” Canada fly half Peter Nelson told the Canadian Press. “We're just trying our very small part to help them in any way we can.”

Lock Josh Larsen, a native of Parksville, B.C., added: “We felt for the people of Kamaishi. (We're) happy to help.”

The Kamaishi locals are no strangers to nature's raw power.

A port town on the edge of the Pacific Ocean, Kamaishi was hit hard in 2011 by an earthquake and ensuing tsunami. World Rugby said 30 per cent of homes were either damaged or destroyed, 60 per cent of businesses were completely inundated and 98 per cent of the local fishing fleet was wiped out.

With files from the Canadian Press and the Associated Press