Police say strong winds may have been to blame after a moving truck tipped over against a cement median on an exit ramp of the Trans-Canada Highway in Saanich, B.C., on Monday.

Traffic slowed but was still able to pass the stricken truck on the Admirals Road off-ramp around 1 p.m. 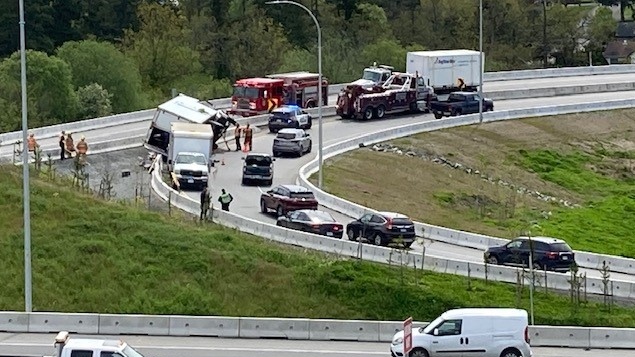 Saanich police say no one was injured in the incident.

Some of the truck's contents had spilled into the area behind the median. The truck was being supported by jacks and appeared to have sustained damage to its box.

A special weather statement warning of high winds has been issued by Environment Canada as a low-pressure system moves in to the Vancouver Island region.

The Ukrainian Canadian Congress wants Russia expelled from the G20. The group's president, Alexandra Chyczij, has written to the prime minister asking him to lead a global campaign to expel Russia from the forum of leading economic nations.

How an increasingly popular supplement landed a man in the hospital

A British man's overdose on vitamin D is a cautionary tale for people who are considering adding supplements to their lives, according to a paper published Tuesday in the journal BMJ Case Reports.

As pandemic restrictions subside throughout Canada, medical professionals reflect on how the international health crisis has revealed the need to carry out discussions about dying.