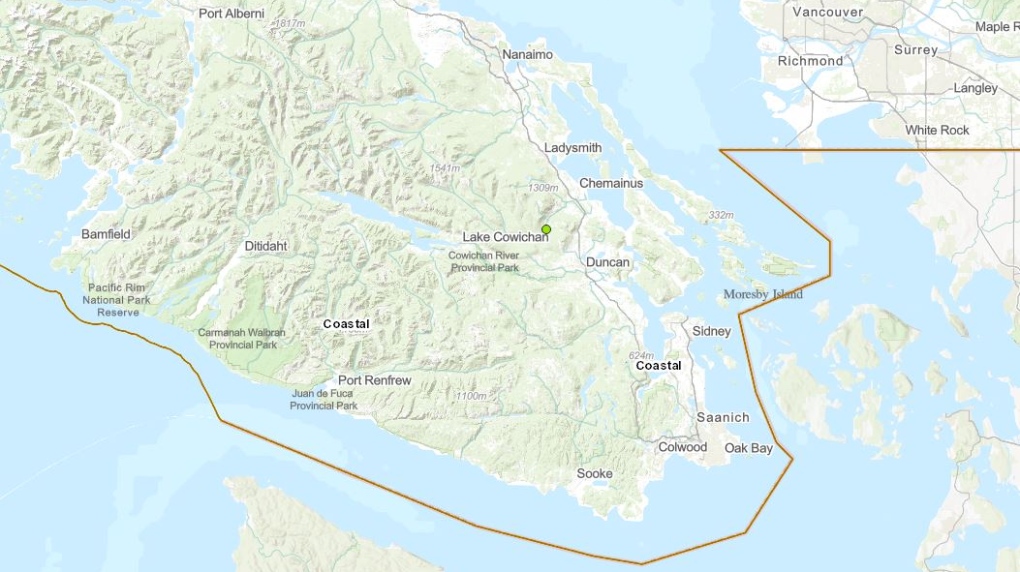 The wildfire is considered contained as of Thursday afternoon: (BC Wildfire Service)
Victoria -

A wildfire that was spotted by the Chemainus River near Duncan, B.C. is considered under control, according to the Coastal Fire Centre.

The roughly 0.3 hectare fire was first reported on Wednesday. A crew of three firefighters returned on Thursday to find the wildfire had not grown overnight, according to fire information officer Marg Drysdale.

That crew remains in the area to monitor and "mop up hotspots" on Thursday, according to the fire centre.

While the news is promising, Drysdale notes that the fire centre does not speculate on when a wildfire will be completely extinguished because conditions can change rapidly.

The fire centre believes that the wildfire was human-caused, though the exact cause is still under investigation.

Drysdale adds that while rain is in the forecast for parts of Vancouver Island this weekend, fire risks remain high across the island.

"It will not be enough rain to knock back our fire danger rating," she said.

"So we are asking everybody to be very vigilant and very cautious about anything they do in forested areas," said Drysdale.

Ontario Premier Doug Ford is set to make an announcement on Wednesday as the province’s COVID-19 passport system kicks off.

Aissatou Diallo, 44, has been found not guilty on all charges of dangerous driving.

A polling station officer says she was scared of contracting COVID-19 on Monday because Elections Canada didn't require workers to be fully vaccinated or allow them to request proof of a medical exemption from maskless voters.

A Conservative who sits on the party's national council says Erin O'Toole should undergo a leadership review by members following his election loss, marking the first open challenge to him staying in the role.

The federal government plans to lift a months-long ban on direct flights from India early next week with enhanced COVID-19 screening protocols in place.

It took a couple of extra days to complete the counting, but Jenica Atwin has been re-elected in the riding of Fredericton -- this time for the Liberals.

More than half of Canadians work despite feeling unwell, at least one day a week: report

A new report has found that more than half of Canadian employees report working while feeling unwell at least once a week, a trend experts at LifeWorks say is contributing to productivity loss in the workplace and a decline in employees' mental health.

Quebec's politicians say they're ready to work together to legislate a ban on anti-vaccine demonstrations near schools and hospitals.