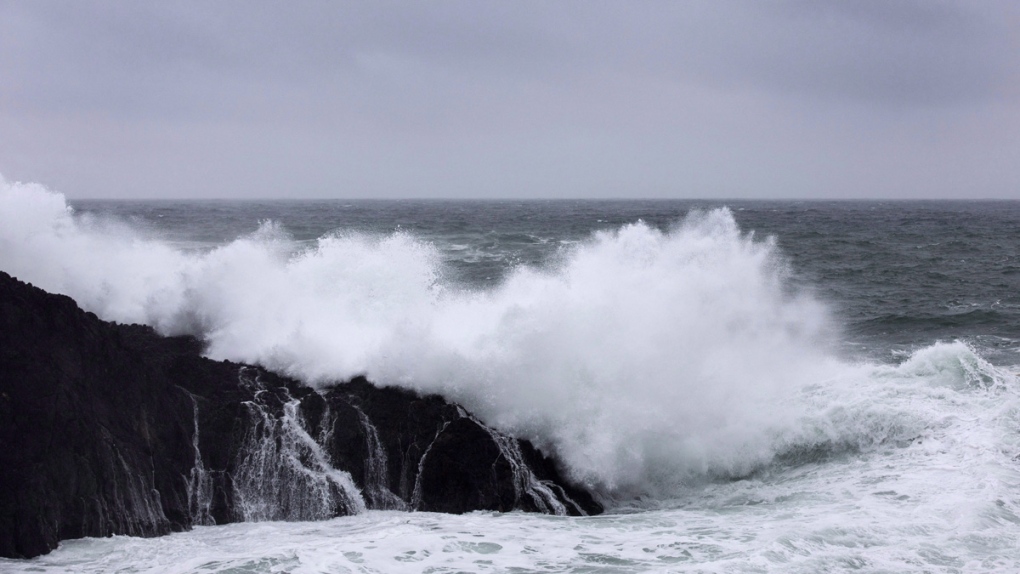 Waves crash against rugged rocks along the Wild Pacific Trail in Ucluelet, B.C. on Jan. 19, 2018. (Melissa Renwick / THE CANADIAN PRESS)

A B.C. seismologist says the reason Vancouver Island and much of B.C.'s coast was spared from a devastating tsunami following a 7.9-magnitude earthquake lies in the difference between slip-strike and subduction.

But for those who don't speak seismology, what does that mean? CTV Vancouver Island spoke with John Cassidy, an earthquake expert with Natural Resources Canada, to help explain the type of quake that struck off Alaska, how long it took waves to travel to Vancouver Island and what people should learn from the harrowing incident.

Just how big was it, anyways?

Cassidy: "This was a huge earthquake beneath the ocean, and so that of course initiates tsunami warnings, advisories. In this case given the magnitude and the location it was issued as tsunami warning. Very large earthquake felt all over a huge area of Alaska, Yukon and parts of British Columbia as well. "

How potentially damaging could it have been?

"A tsunami isn't just a wave, it's a series of waves that can continue for hours. So if we look back at the 1964 tsunami in Port Alberni inlet, that was up between three and four metres and it went on for several hours. The first wave wasn't the biggest, and that's often the case, but it really varies quite a bit along the coast. We know that in Chile, for example, during an 8.8 subduction earthquake some communities see a three-metre tsunami. Just down the road, a 10-metre tsunami. So it really depends on the local conditions, it's very sensitive to the local topography, bathymetry, and it really varies a lot.

So the numbers that have been used around Greater Victoria, for example, four metres is sort of a planning level that's been given out by local organizations. If you're above four metres, that's a good elevation. In other communities – Tofino, Ucluelet – it's more. It may be 10 to 20 metres in some cases. It varies community to community and reminders like the one this morning are very good in that it does give a dress rehearsal."

How long did it take for waves to be seen on the island?

"In this case, it was about a four-hour, nearly a five-hour travel time from Alaska to Victoria. For large earthquakes off of our coast, it might only be 15 minutes or half an hour or an hour here in Victoria, so much shorter times are possible for closer earthquakes."

When did the first alert go out?

"Generally I think it was within five minutes. So the tsunami network around the Pacific is taking in seismic data from Canada, from our seismic stations, from Alaska, from Japan and from Australia, and processing those data automatically and coming up with earthquake magnitude, location and depth."

Why did this initially go out as a warning instead of an advisory or watch?

"In the case of today's event, the initial warning is issued based on magnitude and location but then it's refined over time based on observations, based on waves that are observed and recorded. Because the earthquake was nearly 300 kilometres offshore, it takes time for those first waves to reach coastal communities, nearly an hour."

What kind of quake was it, and why does that matter?

"That's a really important point. Subduction earthquakes like the one in 1964 and the one in 1700 off our coast involve an ocean plate slipping beneath the continent, and what that does is it generates a vertical movement of the sea floor. So it's that lifting of the sea floor or dropping of the sea floor that really gets a tsunami initiated. Today's earthquake was quite different. It was what we call a strike-slip, it was a horizontal slipping and very little vertical motion, and that's likely why we didn't see a tsunami here today."

What else do you think this teaches islanders about being tsunami and earthquake-prepared?

"It's a good reminder for all of us that this is an earthquake zone, it's a tsunami zone. People might think that perhaps these events are so huge that there's nothing they can do, but that's the furthest from the truth, because there are a lot of simple things you can do in your home to be prepared for an earthquake. Have a flashlight and a pair of slippers under your bed. Look around every room that you spend time in and have a plan and know what you'll do when shaking starts. Simple things."