What to expect from Vancouver Island's first summer heatwave

What to expect from Vancouver Island's first summer heatwave

It felt like summer would never get here but we can put those concerns to rest. The summer solstice arrived Tuesday morning at 2:14 a.m. local time and the heat arrives Friday.

After a long, chilly and wet spring we finally get the weather we’ve been waiting for – sunny, dry and hot.

Temperatures will soar into the weekend, with highs in the mid-to-high 20s and overnight lows hanging around the mid-teens.

As we think back to a year ago when we were dealing with an unwelcome and uncharacteristic heat dome, we can dial down the concerns with this normal summer heatwave.

That being said, precautions still need to be taken, don’t spend too much time out in the heat, stay hydrated, use sun protection, check in on older family members and keep a keen eye on children.

Environment and Climate Change Canada has released special weather statements over most of British Columbia, including for Greater Victoria, East Vancouver Island and Inland Vancouver Island. 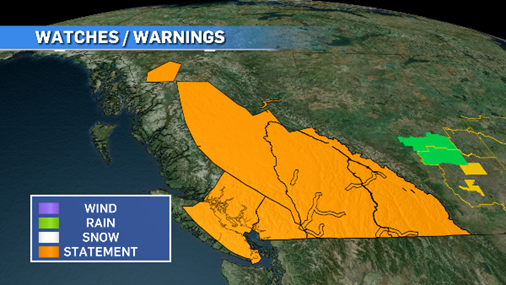 Some areas of Vancouver Island and the mainland will see daytime highs hitting the 30s, but overall we’ll be 10 to 15 degrees cooler than what the intense heat dome brought on last summer.

This upcoming heatwave will also be short in duration and won’t get stuck over the province.

Our first heatwave of the season will run from Friday to Tuesday with cooler temps and possible rain on Wednesday to relieve any "is it hot enough for you?" exhaustion.

The main concern with this heat wave will be the faster melting of the late snow pack, which could create some localized flooding, mud and rockslides, and raise water levels and speeds for our rivers.

Enjoy the heat and sunshine but stay smart with your activities and length of time spent outside.