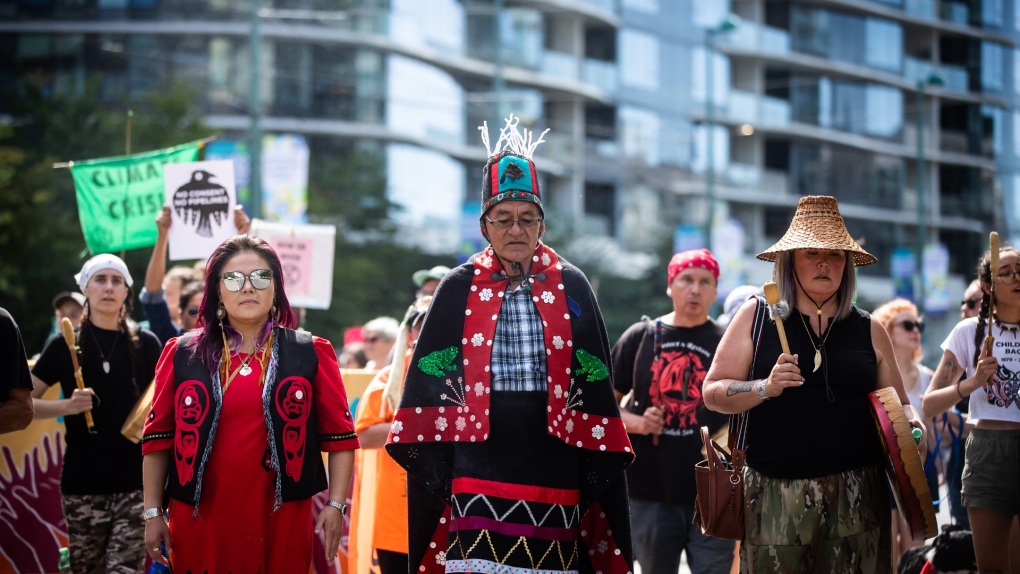 Hereditary chiefs of the Wet'suwet'en First Nation and their supporters are planning a rally at the B.C. legislature on Tuesday to "make an important announcement" about their efforts to stop a natural gas pipeline under construction on their territory.

"The Hereditary chiefs will issue formal public comment about a recent incident of being denied access to ancestral lands by Coastal GasLink," reads a news release issued Friday to announce the gathering.

"The gathering will also address current colonial governments’ failure to fulfill commitments to Wet’suwet’en rights and title as agreed in a memorandum of understanding signed in May 2020."

The rally is scheduled to begin at 3 p.m. Tuesday, with a news conference scheduled for 4 p.m.

The Coastal GasLink project involves the construction of a 670-kilometre pipeline that will carry natural gas across northern B.C. to the LNG Canada terminal in Kitimat. Once at the terminal, the gas will be liquefied and shipped to international customers.

In August, the company said the project was 70 per cent complete.

Dozens of protesters and Indigenous land defenders have been arrested along the pipeline's route through unceded Wet'suwet'en territory since a 2019 B.C. Supreme Court order issuing a temporary injunction against interference with pipeline construction.

While Coastal GasLink has agreements with all of the elected First Nations leaders along the pipeline's route, many Wet'suwet'en hereditary chiefs remain opposed to the project.

In early 2020, opposition to the pipeline led to nationwide protests and blockades.

More recently, police have set up "roving patrols" along forest service roads near the pipeline construction site after a February incident in which police say 20 people "armed with axes" attacked workers and destroyed property at the site.

After a recent visit to Wet'suwet'en territory, BC Green Party leader Sonia Furstenau and MLA Adam Olsen questioned the degree of surveillance from RCMP in the area, which Olsen described as "oppressive" and Furstenau said is "constant" for the people who live there.

FBI Director Chris Wray is raising national security concerns about TikTok, warning Friday that control of the popular video sharing app is in the hands of a Chinese government "that doesn't share our values."

Myanmar's military-installed government has sentenced more critics to death, bringing the total to 139, and is using capital punishment as a tool to crush opposition, the UN high commissioner for human rights said Friday.

Prince William capped a three-day visit to Boston by meeting with President Joe Biden to share his vision for safeguarding the environment before attending a gala event Friday evening where he sounded an optimistic tone about solving the world's environmental problems through "hope, optimism and urgency."

Pentagon debuts its new stealth bomber, the B-21 Raider

America's newest nuclear stealth bomber made its debut Friday after years of secret development and as part of the Pentagon's answer to rising concerns over a future conflict with China.