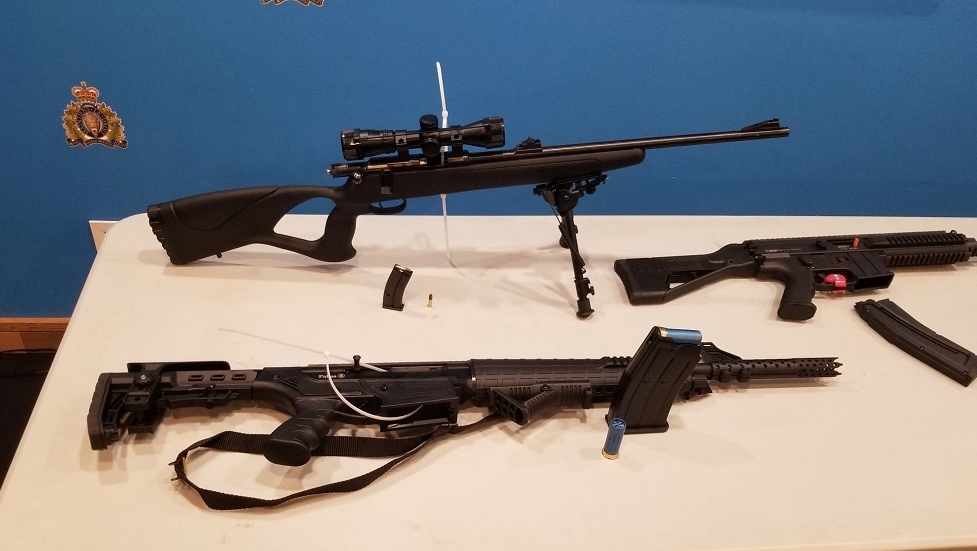 Five firearms, two of which were loaded, were seized by police during a traffic stop Saturday: (West Shore RCMP)

VICTORIA -- A pair of unsafe driving incidents led police to the discovery of several firearms in View Royal on Saturday, according to West Shore RCMP.

The incident began around 9:20 p.m. after a Mountie spotted a vehicle swerving near the intersection of Helmcken Road and Island Highway.

The officer pulled over the vehicle and found that the female driver was not the registered owner of the car and did not have a valid driver’s licence.

The vehicle was then towed from the scene and the driver was served a driving prohibition. Shortly after, the driver called another woman, who is the registered owner of the car, to pick her up from the scene.

The second woman then arrived but was showing signs of drug impairment, according to police.

The officer at the scene, who Mounties describe as a “drug recognition expert,” determined that the new driver was allegedly impaired by drugs and had her vehicle impounded.

Before the second vehicle was towed away, police searched the car and found five firearms inside, two of which were loaded, according to police. The weapons included four rifles and one shotgun. The shotgun and one rifle were loaded, say police.

“Although the woman did have a valid firearms licence, loaded firearms in a vehicle are illegal. It is also unknown why the woman had so many firearms in the vehicle with her,” said Const. Nancy Saggar of the West Shore RCMP in a release Monday.

“Given her impaired state and the unsafe storage, this was a public safety concern and the guns were seized,” she said.

The woman, a 23-year-old Saanich resident, is now facing a charge related to impaired driving and a firearms-related offence.

@WestshoreRCMP frontline officer seized 4 semi-automatic rifles & 1 semi-automatic shotgun from a vehicle after the driver was deemed to be impaired by drugs. 2 of the guns were loaded. Impaired driving and firearms charges are forthcoming. read more here: https://t.co/dgnCmkpaQL pic.twitter.com/Vzmwi1imfw