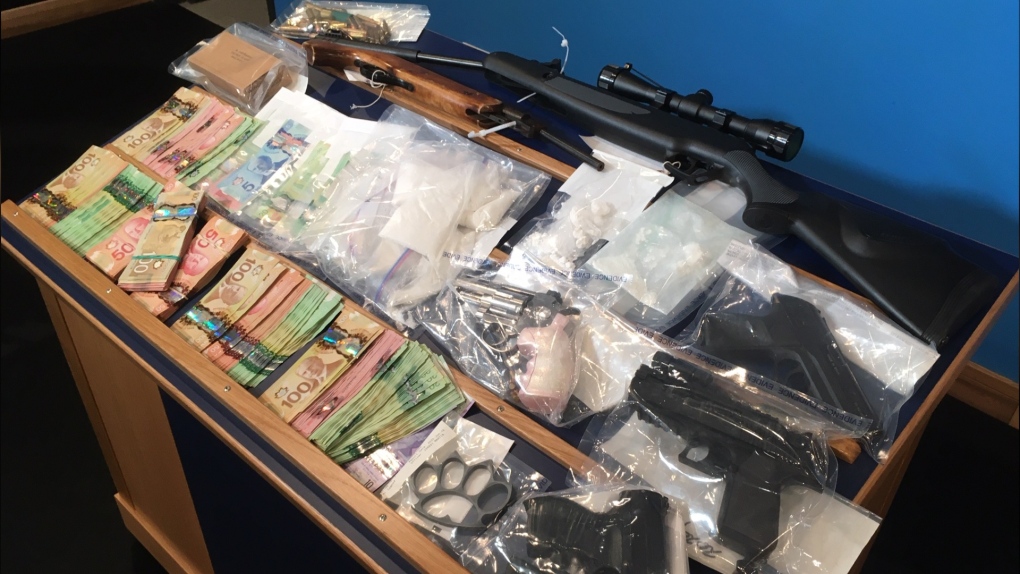 Some of the items seized by West Shore RCMP are shown: (CTV News)

VICTORIA -- Five people have been arrested and a handgun has been seized following a lengthy investigation into a drug trafficking operation on Vancouver Island by the West Shore RCMP.

Mounties say that a nearly year-long investigation recently came to a head when police executed three search warrants on the South Island in late June.

Police say they searched two residences, one in Langford and one at Shawnigan Lake, and a business in Duncan which were all believed to be connected to one drug trafficking operation.

During the searches, police located a loaded, prohibited handgun that had been modified, approximately 90 grams of suspected cocaine, four replica handguns and several additional prohibited weapons, including brass knuckles and a switchblade knife.

Police also seized a number of vehicles from the property, including one stolen vehicle and one stolen mountain bike. Meanwhile, two other vehicles and a motorbike were seized in connection to at least one other crime.

Mounties also located a large-scale illegal marijuana growing operation at one of the properties. More than 100 unlicensed marijuana plants were confiscated by police.

“The West Shore RCMP Drugs and Organized Crime Unit is continuing this investigation and numerous drug trafficking and weapons related charges are expected to be forwarded to Crown Counsel.”