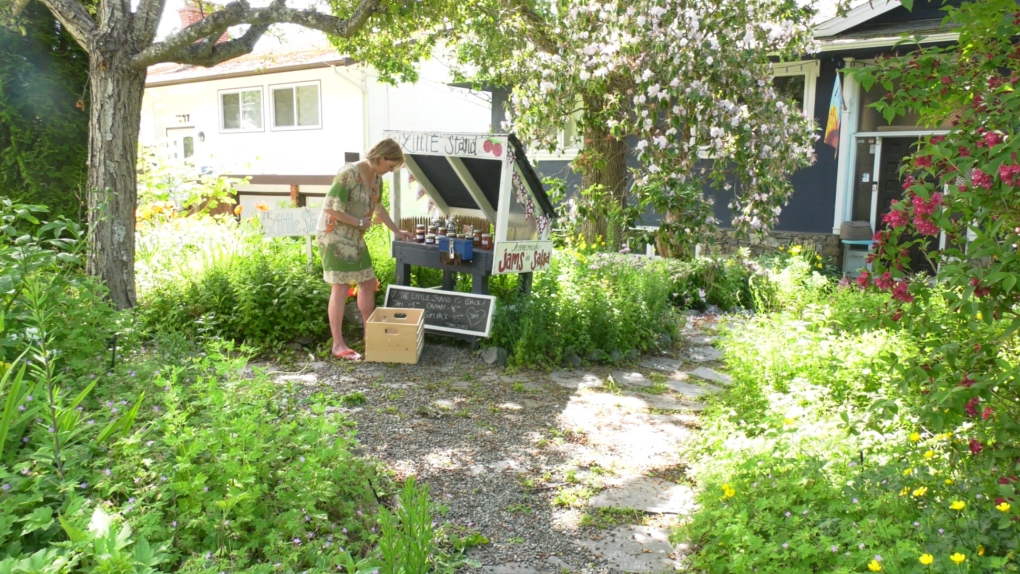 Katherine Little tends to her jam stand in the Maplewood neighbourhood of Saanich: May 26, 2020 (CTV News)

VICTORIA -- Last night, in a unanimous vote by Saanich council, there was a victory for a little front yard jam stand.

You could call it a David versus Goliath type battle. In one corner, a quaint stand selling jams and salsa – in the other corner, the largest municipality on Vancouver Island.

“It was pretty great,” said Katherine Little, owner of the The Little Jam stand in Saanich.

On Monday night, Saanich council temporarily suspended all bylaw enforcement of home vendors, until the municipality received and reviewed a more thorough report on the matter.

“Any farm stand, craft, flowers, fruits, vegetables, valued added, which is what they added for us – can operate in Saanich right now without having enforcement action taken against them,” said Little. “So we’re pretty excited.”

The decision has sent happy shockwaves across the municipality.

Colleen O’Farrell owns Foxgloves Flowers. She has been running the delivery business out of her backyard studio for 10 years. The problem is, almost all of her summer business in wedding-related.

“When COVID hit, the phone stopped ringing and everybody was shutting down and nobody knew what to do,” said O’Farrell. “Honestly, I panicked.”

So, she setup a roadside stand in her front yard, hoping for local sales. For a while, that was going well until bylaws shut her down.

Now, she can reopen again.

Saanich council is now waiting on a report from staff that reviews possible amendments to the bylaws that prohibit roadside sales.

“Given the situation with COVID, there’s no question there’s an awful lot of businesses that have been hard hit,” said Coun. Karen Harper.

“In the meantime, we’re making it easier for businesses that come under the rules that we’ve adopted to be able to sell locally.”

The original shutdown of Little’s jam stand all started with a complaint from one of her neighbours. Heather lives across the street from the stand and is happy that it’s open again.

“I think most of the community is happy,” said Heather. “It’s become part of the community, especially in this time. It’s nice to support local products and it doesn’t get much more local than across the street.”

For Little, it’s been a long, frustrating 11-month fight. But for now, she’s happy to be stocking her little jam stand again and selling to her loyal customers.

“I’m just telling people, 'You know what? It took a pandemic to get this silly little bylaw changed,'” she said.

“It’s not changed yet, but we are allowed to temporarily operate.”