'We didn’t have much growing up': Nanaimo pair wins $5M lottery 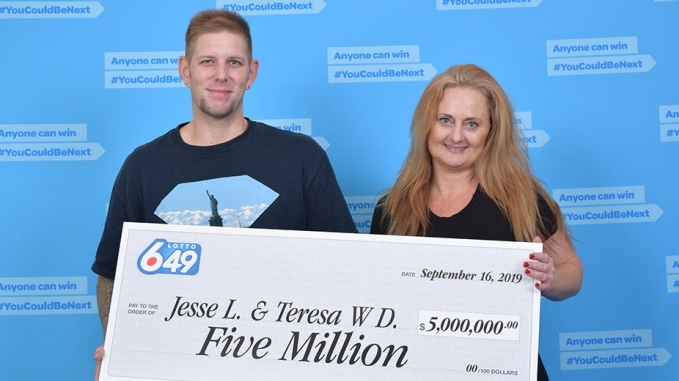 Jesse Logan and Teresa Winters Day won $5 million in a a Lotto 6/49 draw. (BC Lottery Corporation)

Vacations to Disneyland and a brand new recording studio are amongst the plans of a lucky Nanaimo pair.

The two mid-island residents, Jesse Logan and Teresa Winters Day, told the BC Lottery Corporation (BCLC) that they were "ecstatic" and "almost fainted" when they realized that they had won the $5-million grand prize for a Lotto 6/49 draw in August.

The pair now plans to use their winnings to treat their respective families.

"I will be able to spoil my kids," Winters Day told the BCLC.

"I’ve always wanted to go to Disneyland… that’s the first thing I’ll do with my kids, and then go on a shopping spree," she added.

Meanwhile, Logan plans to use his portion of the winnings to support his loved ones and pursue his passion for music by building a recording studio.

"I will be able to help my family out and that is something I have always wanted to do," he said.

"We didn’t have much growing up but my parents did the best they could. I am excited to give back to them."