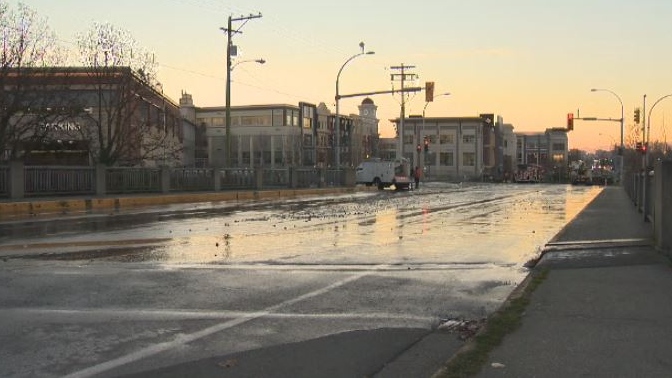 The water main burst in the area of Carey Road and Cadillac Avenue at roughly 7 a.m., shutting down the roads and the nearby Galloping Goose trail. Dec. 4, 2018. (CTV Vancouver Island)

A broken water main shut down roads and part of a popular bike trail in Saanich Tuesday morning.

The main burst in the area of Carey Road and Cadillac Avenue at roughly 7 a.m.

Water flowed onto surrounding roads and also onto the Galloping Goose bike trail, shutting down traffic around the Uptown Centre.

The water was shut off as crews worked to repair the damage.

There were reports that water was making its way into Brown's Socialhouse, a restaurant at Uptown.

The Galloping Goose trail was reopened at around 11 a.m. The District of Saanich said it was uncertain how long the roads would remain shut down for, but closures would likely last until the early evening as crews cleaned up debris.