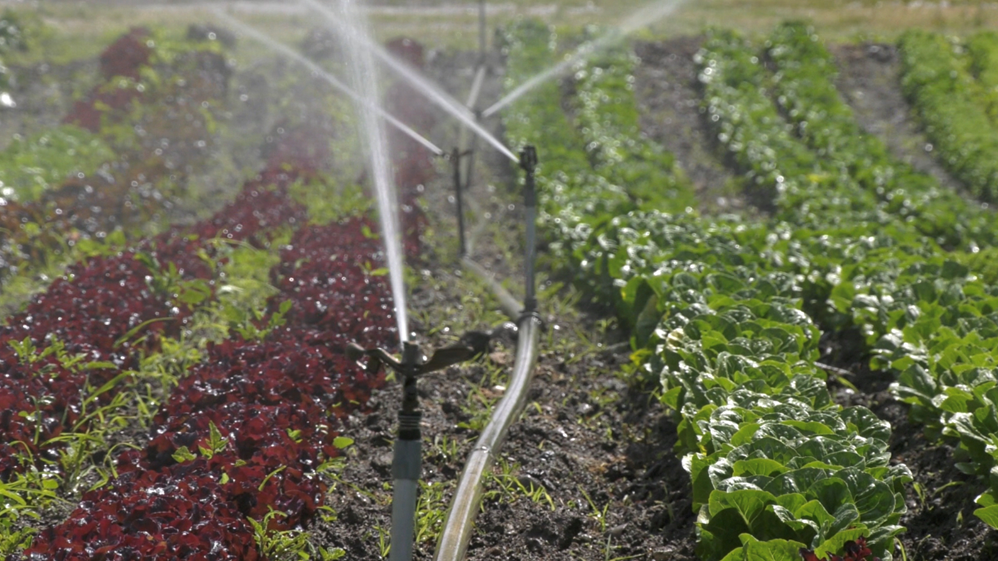 VICTORIA -- The sprinklers are on at Dan’s Farm in Central Saanich to combat drought-like conditions brought on by an unusually warm and dry spring on Southern Vancouver Island.

According to Environment Canada, the monitoring station at Victoria International Airport has only recorded 53 millimetres of rain since March 1. That’s approximately a third of the typical rainfall accumulation of 154 millimetres on the Saanich Peninsula.

“It’s definitely dry, quite dry and it’s been a lot of irrigating,” said Dan’s Farm owner Dan Ponchet. “We started watering back in April and it really hasn’t stopped.”

Ponchet said the abnormally dry conditions forced him to irrigate his crops as soon as they were planted. The early watering has made for a busier-than-normal spring season, he said.

“The spring has been hectic to say the least,” said Ponchet. “A lot of planting and irrigating right away as soon as they go in the ground so the seeds can germinate.”

Ponchet said this spring has been the driest he’s ever experienced at his farm on Bear Hill Road.

“Its been amazing to see how dry it is,” said Ponchet. “In early May, it was so hot out we had to water all the time, practically 24 hours a day.”

Another weather-related challenge Ponchet has had to cope with is the amount of wind that has accompanied the warm temperatures. He said the added wind has not only made it difficult to control where the irrigation sprinklers direct the water, but it also makes the conditions dryer.

“To get those plants to grow, we have to stay on top of it and make sure they get water when they need it,” said Ponchet. “I have a regular schedule and I water everything we grow every three to four days.”

At Ponchet’s Walton Place holding, he grows a number of varieties of lettuce, cabbage and other vegetables. He employs a series of sprinklers to keep the vegetables thoroughly watered.

The vegetable fields are bordered by fruit trees and raspberry bushes. Ponchet uses a drip irrigation system to keep the fruit-bearing portion of the farm’s holding watered.

“Everything we have in the ground, we have to water,” said Ponchet. “We have to have watering systems in place and ready to go for everything we grow.”

To combat the drought-like conditions, Ponchet said, he has used 10 to 20 per cent more water to irrigate his crops this spring than he has in past years.

“That’s what it takes nowadays to grow successfully,” said Ponchet. “We have to have as much a we can on irrigation because we can’t grow without it.”

Ponchet said irrigating his crops does make for more work in his fields, but the warm dry weather conditions are sure to bring more customers to his Saanichton farm market.

“We’re more likely to see more customers come out on sunny days than we are on wet days,” said Ponchet. “As long as we have the fall, winter and spring being a little wetter, I can handle the summer being dry.”

With above normal temperatures on the way for Southern Vancouver Island this summer, Ponchet may be forecasting more irrigation of his crops and more customers at his farm market.