A dramatic rescue unfolded on the coast of Vancouver Island on Sunday evening.

A young harbour porpoise was trapped on the shore along a popular resort area near Nanoose, B.C.

Nathalie Marie was the first person to spot the marine mammal, which could easily be mistaken for a dolphin.

"It had lacerations on the body, but nothing bleeding," she told CTV News. "We believe it's caused by the rocks because it was shallow water."

Uncertain of who to call for help, Marie took to social media.

"Because on a Sunday who do you call?" she said laughing. "So [community members] were able to make other phone calls, and the DFO was right on it as well."

Several people answered Marie's call for help, including the DFO (Department of Fisheries and Oceans Canada) and someone with marine mammal experience.

Guided by a representative of the DFO on the phone, a group assembled by the harbor porpoise and were advised on how to return it to the ocean.

Rescuers put a towel under the porpoise for about half an hour and removed a fishing line that was tied around its nose before they tried to move it back into the ocean. 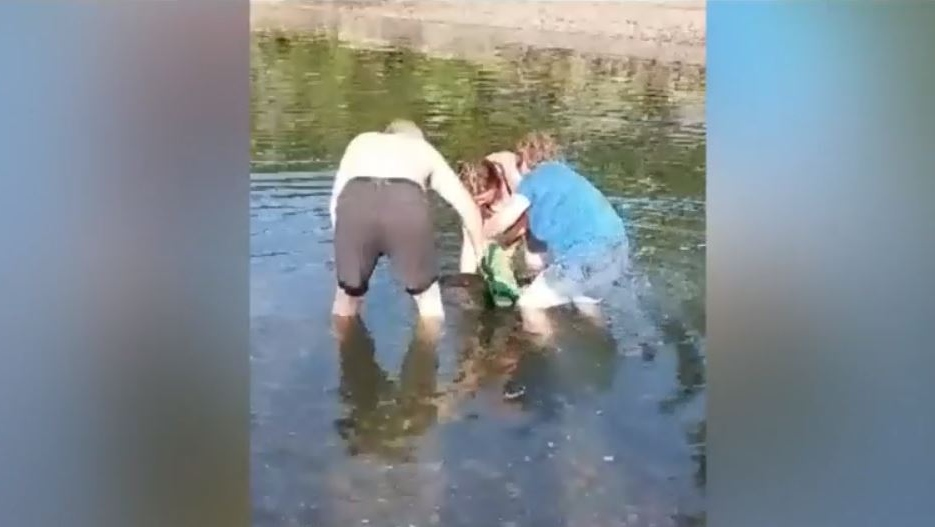 "When I first touched it and brought it into deeper water it had like this burst of energy and it just went – but it came right back to the shore," said Marie.

"Definitely under a couple of weeks of age," he said.

Eventually, the group was able to take the porpoise to deeper waters by putting it on a paddle board.

It's not known how the porpoise fared after the rescue, but Marie says she was thrilled by the community's efforts.

"It was magnificent. it was just this community getting together," she said.

"It gives hope, it gives like joy-de-vivre. It shows together that we can pull great things together," she said.

The DFO says the group did the right thing by reaching out to the Marine Mammal Hotline before trying any action, something it says should be done every time people come across marine animals in distress.

Many trapped in Florida as Ian heads toward South Carolina

Rescue crews piloted boats and waded through flooded streets Thursday to save thousands of Floridians trapped after Hurricane Ian destroyed homes and businesses and left millions in the dark. The destruction began to come into focus a day after Ian made landfall in Florida as one of the strongest hurricanes ever to hit the U.S.

Hundreds of royal fans lined up outside Windsor Castle for the chance to pay their final respects to Queen Elizabeth II as the chapel where the late monarch was buried opened to the public Thursday for the first time since her death. The queen's death certificate says the 96-year-old monarch died of old age.

The RCMP says Jeremy MacKenzie's arrest was not influenced by Conservative Leader Pierre Poilievre's request to have the Mounties look into comments about his wife.

Quebec's immigration and labour minister claims that newcomers to the province "go to Montreal, don't work, and don't speak French," though he later tweeted he expressed "his thoughts badly."

FinTok: How TikTok is changing financial literacy in Canada

Financial TikTok – or FinTok – has become one of the most popular trends on the platform, and is emerging as a go-to resource for Gen Z and millennial audiences looking to learn how to invest, budget or even spend more wisely.

Russia to annex more of Ukraine on Friday at the Kremlin

Russia planned to annex more of Ukraine on Friday in an escalation of the seven-month war that was expected to isolate the Kremlin further, draw it more international punishment and bring Ukraine extra military, political and economic support.

A rift has emerged in the Danish royal family following a decision by Queen Margrethe to strip four of her eight grandchildren of their royal titles in order to "future-proof" the monarchy.

What may be the broadest and longest study to date has found Canada's Arctic Ocean is growing more acidic up to four times faster than any other sea on the planet.

Diabetes risk twice as high for those who feel lonely: study

People who feel lonely are twice as likely to develop Type 2 diabetes, according to a new Norwegian study that analyzed data collected from more than 24,000 people over more than 20 years.