A local farm and family are receiving a rare award from the province for operating their farm on Vancouver Island for more than 100 years.

The Pollock Family Farm, located in View Royal, B.C., has been in operation since 1921, and the family was awarded a Century Farm Award from the B.C. Government earlier this month.

The initial farm land was purchased from the Hudson's Bay Company near Six Mile Pub by brothers Neil and Malcolm Pollock.

The brothers then cleared the 24-acre parcel with horses, before building four greenhouses to grow crops in, according to the province. 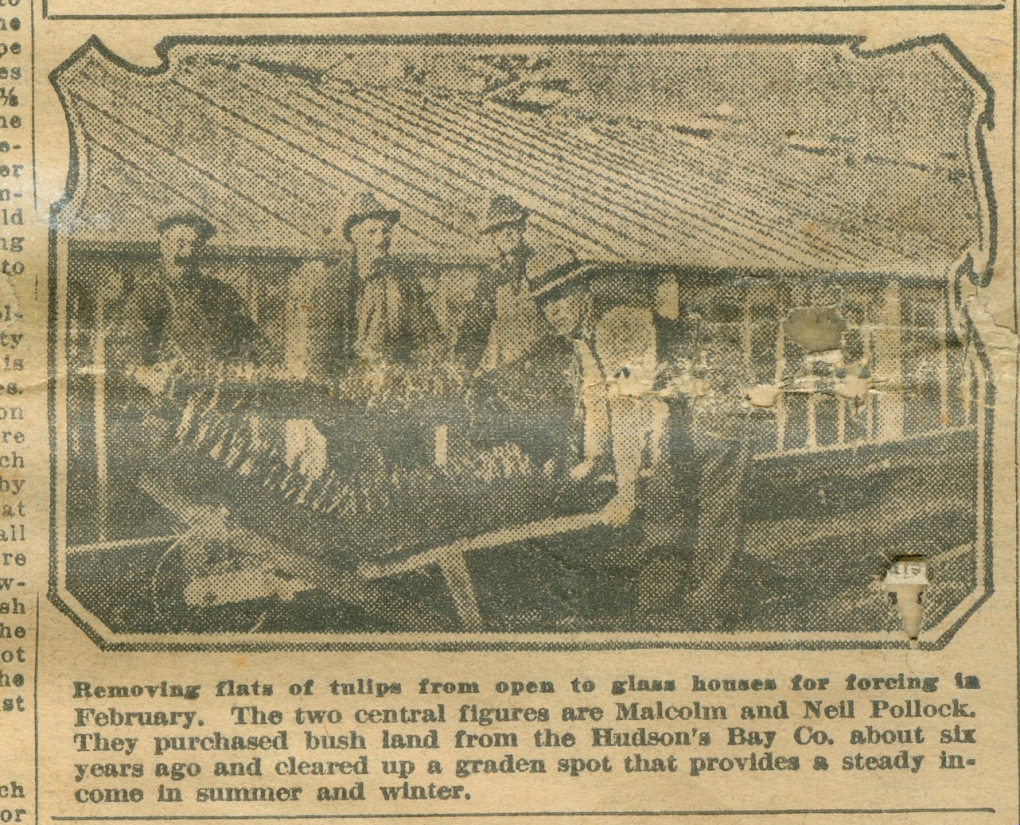 The Pollock brothers Neil and Malcolm are pictured in a 1927 article. (Submitted)

The farm was in operation during the Second World War and the Great Depression, by which time it also included a barn, milk house and farmhouse.

Decades later, in 1970, Malcom's son, Earl, would sell the land that the original greenhouses were on and move most of the operation to the farm's current location along Atkins Road.

Earl would operate the farm until 1990, at which point his son, David, and his wife, Ingelise, were added to the deed and helped bring in apple and berry crops to the farm's operation.

David fully took over the farm in 2003, and he continues to operate it today.

"Although being in the spotlight makes us apprehensive, our family appreciates receiving the Century Farm Award as it’s a once-in-a-lifetime event," said David in a release Saturday.

"Our family has taken care to preserve both the historic features of our property and its viability as a farm, and I hope to one day hand it down to the next generation," he said.

B.C. Agriculture Minister Lana Popham says the longstanding farm's history is a reflection of the Pollock Family and the surrounding community,

"Family farms are at the heart of our communities, and I want to thank the Pollock family for providing homegrown food to the Victoria area for over a century," she said.

A dating app for Conservatives is now live, and already facing backlash

“No democrats!” multiple women say when asked what they're looking for in an advertisement for the Right Stuff, a dating app for Conservatives backed by Paypal co-founder Peter Thiel, which launched in the U.S. last week.

Hockey Quebec says it has lost confidence in Hockey Canada and will not transfer funds to the national organization. The provincial federation confirmed that its board of directors adopted a motion Tuesday night saying it does not believe Hockey Canada's current structure can change hockey culture.