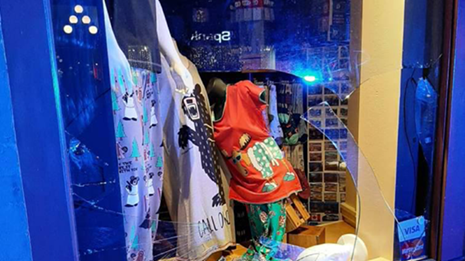 The man then fled Centennial Square for the 500-block of Johnson Street, where he allegedly smashed the window of a business. (VicPD)

VICTORIA -- Police in Victoria are looking for witnesses Thursday after a bizarre crime spree in the city’s downtown core.

Investigators say several store windows were smashed, a police officer was assaulted and a city staff member had blood smeared on their back during the ordeal.

Police say the crime spree began at 4:30 a.m. in Centennial Square when a man covered in blood wiped blood on the back of a city worker.

The man then fled Centennial Square for the 500-block of Johnson Street, where he allegedly smashed the window of a business.

Police then received several complaints and began a search for the man.

Police say the man then caused “significant damage” to a parked car and wiped blood on a Victoria garbage truck.

Investigators allege he proceeded to the 1300-block of Government Street, where he smashed the windows of two other businesses.

When police approached the man, he refused to surrender and assaulted an officer while resisting arrest, according to police.

Police used a Taser on the man and took him into custody. He was treated at the scene for non-life-threatening injuries and transported to police cells.

The police officer did not require medical attention and completed his shift.

Investigators are recommending charges of assault and assaulting a police officer, as well as three counts of mischief under $5,000 and one count of mischief over $5,000.

Anyone with information about the incident is asked to call Victoria police at 250-995-7654 or report anonymously through Greater Victoria Crime Stoppers at 1-800-222-8477.