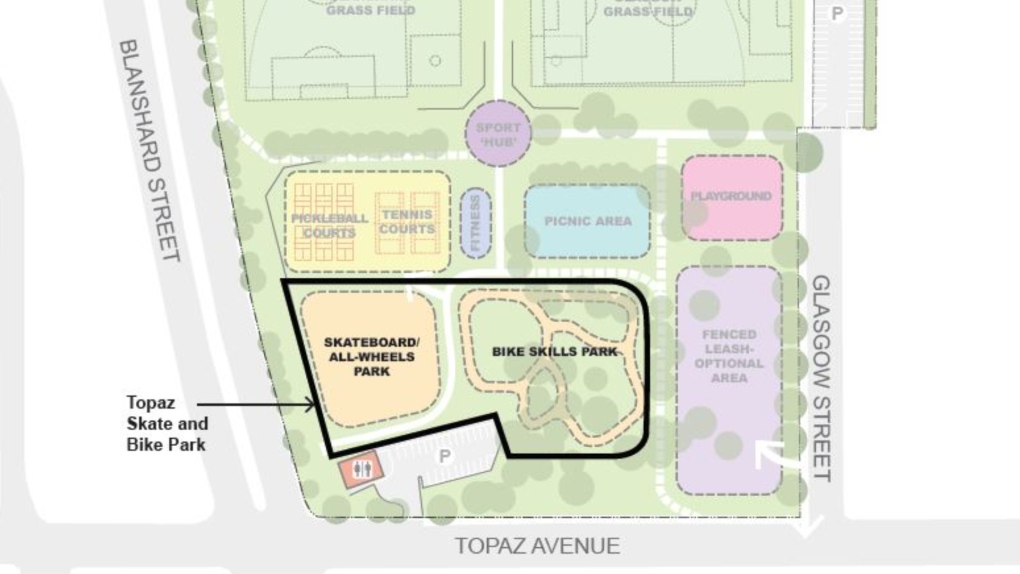 The location of the upcoming skate and bike park is shown: March 2, 2021 (City of Victoria)

VICTORIA -- The City of Victoria has picked a Vancouver-based team to lead design and construction of a multi-million dollar skate and bike park in Topaz Park.

The group, New Line Skateparks, was chosen after the city held a public competition to head the $3 million project.

According to the city, New Line has experience building more than 300 park projects across Canada and the world over the past 20 years, including in the U.S., Australia, Europe and Asia.

The New Line team is made up of landscape architects, engineers, community outreach specialists, construction professionals and arborists. The city adds that many of the team members are also "high-level skateboarders and BMX/mountain biking enthusiasts."

"The team also includes gender equity, accessibility, and youth programming experts to ensure the new skate and bike park meets the wide-ranging needs of the community," said the city in an announcement Tuesday.

While New Line is bringing its own team members to the project, the city says it is looking to commission a local artist or artist group to design public artwork at the skate park. Artists can apply for the project here.

The final design will be completed with input from community stakeholders, says the city, and will include areas for both experienced and new riders.

"To attract a team of this caliber is pretty exciting and speaks to the passion in our community for skateboarding and cycling," said Victoria Mayor Lisa Helps.

"We heard a lot of community support for a skate and bike park during the development of the 10-year Topaz Park Improvement Plan, and now we’re making it a reality," she said.

Victoria city council approved the new park amenities in January 2020 as part of the city's plan to enhance Topaz Park. The skate and bike parks are expected to open in summer 2022.