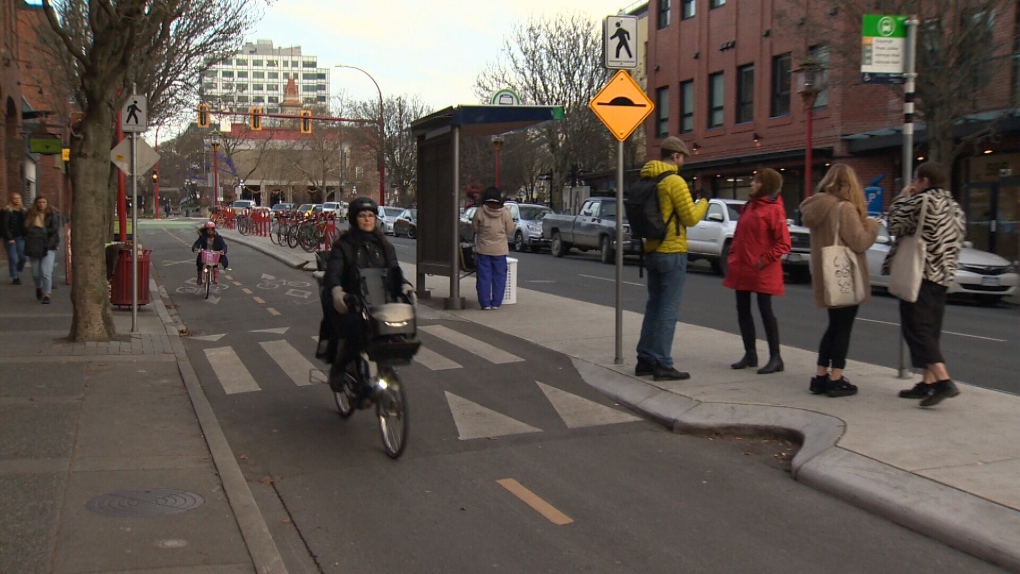 The City of Victoria is fighting the Canadian Federation of the Blind following a complaint made about the city's new bike lanes.

A source has told CTV News Vancouver Island the city applied to have a human rights complaint made by the federation dismissed.

At issue is the design of some of Victoria’s new bike lanes.

The CFB believes the city discriminated against people who are visually impaired by building bike lanes between bus stops and the curbs, making it too dangerous for those who can’t see to get on and off the bus.

But Victoria refuses to confirm that it has filed a request to dismiss the human rights complaint.

The reason given for that refusal has changed dramatically in the matter of a few days.

Initially, the City claimed it was legally prevented from revealing what its response filed with the BC Human Rights Tribunal was.

“BCHRT process requires that the content of the City’s response remain confidential until the matter proceeds to a hearing. Therefore, I am not able to comment on the specific details of our response until a hearing is held,” wrote Bill Eisenhauer, Head of Engagement for the City of Victoria, in an emailed response.

However, CTV News confirmed with the Human Rights Tribunal that those involved in human rights complaints are not prohibited from discussing their case.

In fact, unless there is a special order in place, they can talk about whatever part of their case they want, with whoever they want.

We went back to the City of Victoria with that information, and asked again for confirmation it had applied to have the complaint dismissed.

We received a new response.

This time the Victoria explained it is choosing not to discuss or confirm any aspect of the complaint, until the complaint is no longer before the tribunal.

“We believe the dialogue should be between the parties and not through the media. Therefore, to encourage productive discussions with the CFIB (sic) to review the concerns they have raised and options for improved safety for users of all abilities, we are not able to provide further comment on this matter,” wrote Eisenhauer.

CTV News is not aware of any current discussions underway with the CFB.

“The City is committed to improving accessibility for all residents and visitors. While the current design and construction of these bike and bus zones are based on the latest Canadian and US transportation standards applied in other cities in BC and across North America, we are open to exploring further improvements,” added Eisenhauer.

“They know there’s a hazard created for blind people. It’s as if the blind are not a part of the community,” said Oriano Belusic, the person named in the complaint on behalf of CFB.

“Clearly if a blind person cannot safely cross the bike lane you can’t say, you can’t claim that you’ve done everything for everybody in the community to make it safer,” said Belusic.

The problem is the bus stops, known as “floating” stops, that are along the vehicle lane. The bike lane is between the curb and the bus stop.

The base of the complaint is that bicycles are virtually silent, making it hard for blind people to tell whether a bicycle is coming when getting off the bus.

“For some of us, the solution is to avoid that part of town, getting off the buses and getting on the buses on those particular bus stops,” said Belusic.

“The city decided to prioritize convenience of able-bodied people, that being the cyclists, over the disabled who need protection," said Charles Lugosi, the lawyer representing the Canadian Federation of the Blind. "It seems kind of unfortunate that the able bodies have been given bike lanes and biased in their favour versus the prejudice that was created with respect to the visually impaired."

The City of Victoria insisted it is committed to improving accessibility for all residents and visitors and has recently taken action to make crossing the bike lanes at bus stops safer.

“Additional signage and pathway markings were installed to reinforce the requirement to yield to pedestrians crossing at the marked crosswalk,” explained Eisenhauer.

But adding more signage and markings for cyclists isn’t a safe solution, according to Belusic.

Pedestrians play a role in their own safety, looking both ways before they step into traffic or across a bike lane, but those who are visually impaired can’t trust every cyclist will always be paying attention or do the right thing.

“You couldn’t make a worse scenario," he said. "It’s not as if the bikes make noise and the blind people can actually listen for them or hear them."