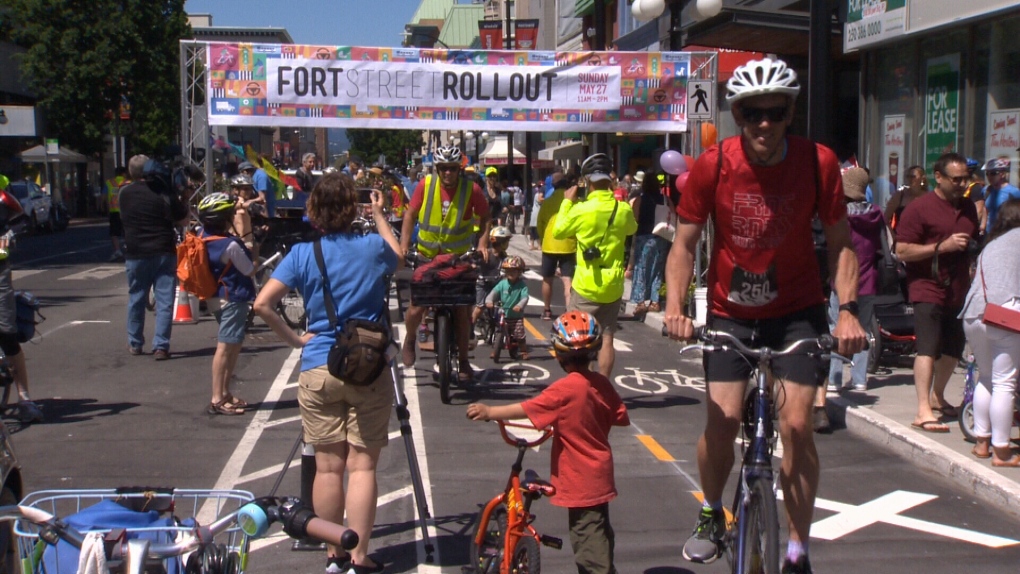 Cyclists gather for the opening of the Fort Street bike lane

The second two-way bike lane in Victoria had its official grand opening on Sunday.

Cyclists of all ages gathered at the event to celebrate the opening of the bike lane, which stretches one kilometre down from Wharf to Cook Street.

Mayor Lisa Helps, an avid cyclist, gave a speech at the event and started with an apology to the businesses along Fort Street.

Local businesses on Fort Street have criticized the construction of the bike lane, saying their sales have been greatly affected and felt like they weren’t heard during public consultations on the project.

“We’re not so much concerned about parking, lost space, things like that,” said Michael Rodgers, owner of The Papery. “But we’re concerned about if there’s any incident on the street and any emergency vehicle comes and stops. It shuts down the whole [street] from Douglas right down to Wharf.”

Rodgers also said the construction didn’t affect his sales, and that in fact, he saw an increase. However, other businesses along the street can’t say the same.

The owner of Alcheringa Gallery, which is on the opposite side of the construction, says that she saw a drop in sales.  “About 30 per cent for those first three months,” said Elaine Monds. “That was unexpected because the economy is strong.”

During her speech, the mayor challenged businesses to measure their sales from “today forward with two times the amount of customers coming right by their front doors.”

She also adds that “these kinds of infrastructure along retail streets, it ends up, in the long run, being good for business.”

Construction on two more bike lanes will start in October. One will be built along the west side of Wharf Street and another on Humboldt.

Construction of a fifth bike lane, down Vancouver Street, is planned for early next year.