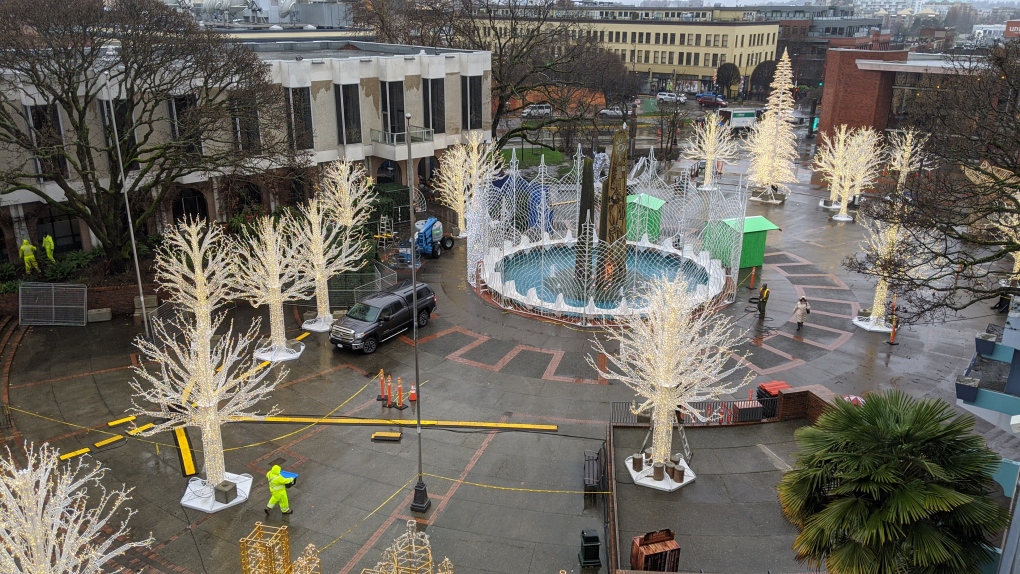 The Lights of Wonder celebration was last held in December 2019. (CTV News)

Victoria’s Centennial Square is a hub of activity as workers create what will be a dazzling light display for tens of thousands of Victorians to enjoy in time for Christmas.

The Lights of Wonder holiday celebration will once again illuminate the square starting Dec. 16.

Crews are assembling a variety of structures shaped like trees, arches, a crown and even a replica of the gate to Victoria’s Chinatown.

The custom-made display, featuring half a million lights, takes three weeks to install.

“We’ll have nine nights of entertainment on the Centennial Square stage,” says Jeff Bray, the executive director of the Downtown Victoria Business Association.

The event was cancelled last year, but in 2019 an estimated 75,000 people took in the free light show.

“It’s a way to really just enjoy each other and the community and also a chance to support our small- and medium-sized businesses, who are actually providing this, by shopping downtown,” Bray says.

People are encouraged to bring the family, take photos and enjoy the spectacle that promises to be bigger and better than in 2019.

Following current provincial health orders, the event does not require masks or proof of vaccination because it is outside, says Bray.

The light display will also be open Christmas Day. On New Year’s Eve, there will be an early countdown for the kids and another one at midnight for those wanting to stay out later.

The Lights of Wonder runs Dec. 16 to 31. Volunteers are still needed if you would like to help. For more information go to the event website.