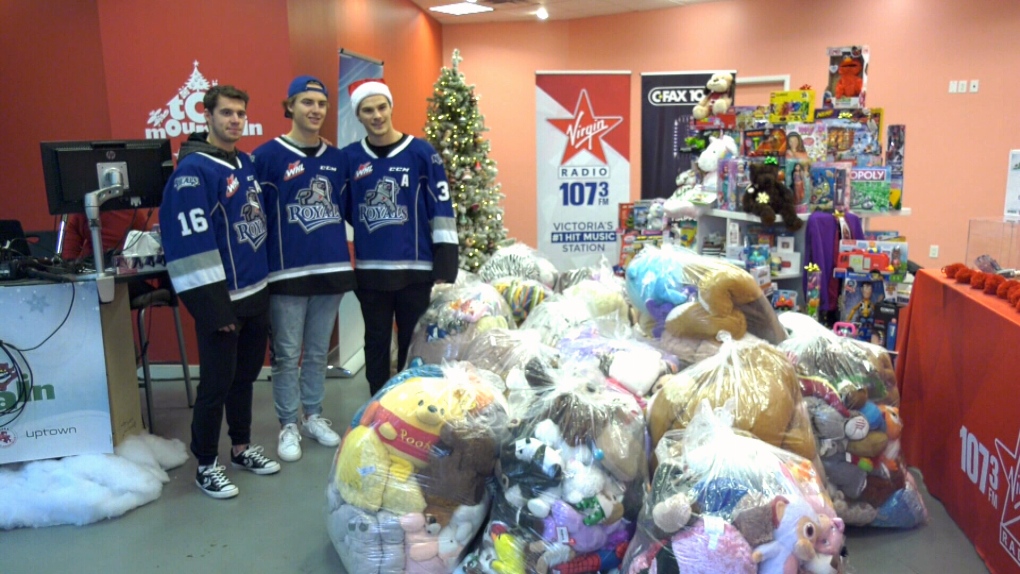 VICTORIA -- Members of the Victoria Royals are playing Santa Clause this week, delivering sacks full of stuffed-animals to a wide range of island charities, including Bell Media’s Toy Mountain.

The hockey team's contribution more than doubles a steadily growing stack of Christmas gifts that will be presented to about 1500 local families through CFAX Santa’s Anonymous.

“This is absolutely incredible,” Bell Media Victoria's promotions director Sarah Gray said. “This is our first year doing Toy Mountain in this community, so a boost like this — knowing that a local team has gone to their fans and said, 'donate a toy, donate a stuffed animal' — and its going back to kids in our community, it’s a huge boost to Toy Mountain and to CFAX Santa’s Anonymous.”

The Victoria Royals defeated the Seattle Thunderbirds three to one in their Teddy Bear Toss game over the weekend. After the Royals' first goal of the game, hundreds of stuffed animals were thrown onto the ice by local fans in a show of support for local charities.

“It really is a different experience 'cause we're all on the ice playing hockey and to be a part of a bigger cause and something that’s more important than the game really means a lot,” said Royals forward Carson Miller.

“Something to bring holiday spirit into hockey and bring the community together and bring us into the community, it really is pretty cool,” said Miller.

The team at Toy Mountain has been collecting donations for CFAX Santa’s Anonymous for just a few days, and they will continue to pile up the presents until December 20th. The success of the toy drive so far and the generosity of the community has already got the team talking about plans to carry on with the cause next year.

“This can only go up from here and we can only build our mountain higher and we’re just looking to give back to the community and help kids around the city,” said Gray.

The Victoria Royals say they filled more than 140 large garbage bags with stuffed-animals from the Teddy Bear Toss which are also being donated to the Mustard Seed and the United Way, among many other local charities.