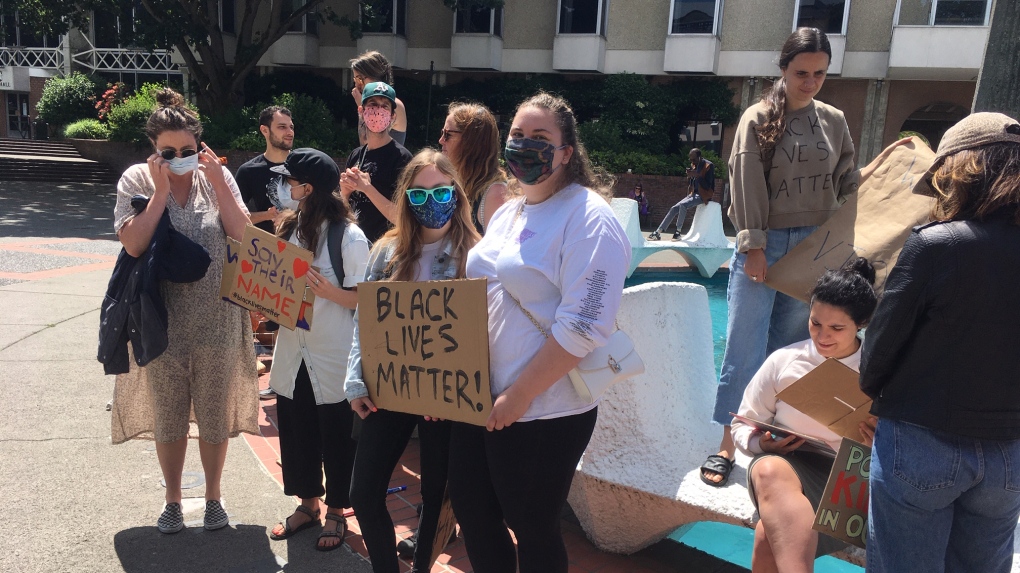 Dozens gathered at Victoria's Centennial Square to take part in a march in support of the Black Lives Matter movement: June 1, 2020 (CTV News)

VICTORIA -- A group of Victoria youth rebuilt a “people-less protest” in Centennial Square Friday after the first installation was apparently vandalized.

On Wednesday the group painted messages of solidarity against racism around the fountain in Centennial Square with the support of city council. They also hung papers with the names of victims who lost their lives to deep racism. On Thursday the papers were found torn down.

The protest is part of the international outrage over the killing of George Floyd, a Black man who died while in police custody in Minneapolis, Minn.

"We have racism too in our nation," says Agartu Ali, one of the peopeless protest organizers.

"It's not something that's just in America, and I feel like when we ignore that and when we pretend that we live in this kind of race-free nation where people’s background and people’s colour aren't an issue, we allow that systemic oppression to continue," says Ali.

A group of about 50 people came together to repaint the messages and rehang the names of the victims.

The people-less protest comes before a peaceful march planned Sunday in support of the Black Lives Matter movement.

Victoria police Chief Del Manak says the police plan to be present during the rally as they would any large gathering. The chief says he's spoken to the march's organizers and says he understands the need for the protest and will attend himself.

"I wanted to stand as a police chief and as a visible minority police chief and somebody who's actually been on the receiving end of racism and discrimination and hate, just to say I do understand what the motive is and why this rally needs to happen," says Manak.

"I'll be there… not in a police role but in a role to support what we all need to be talking about which is [to] stand in solidarity and really stamp out any type of racism that we have here and just talk openly. I think it's every single person's responsibility to do their part and I'm certainly willing to do that Sunday."