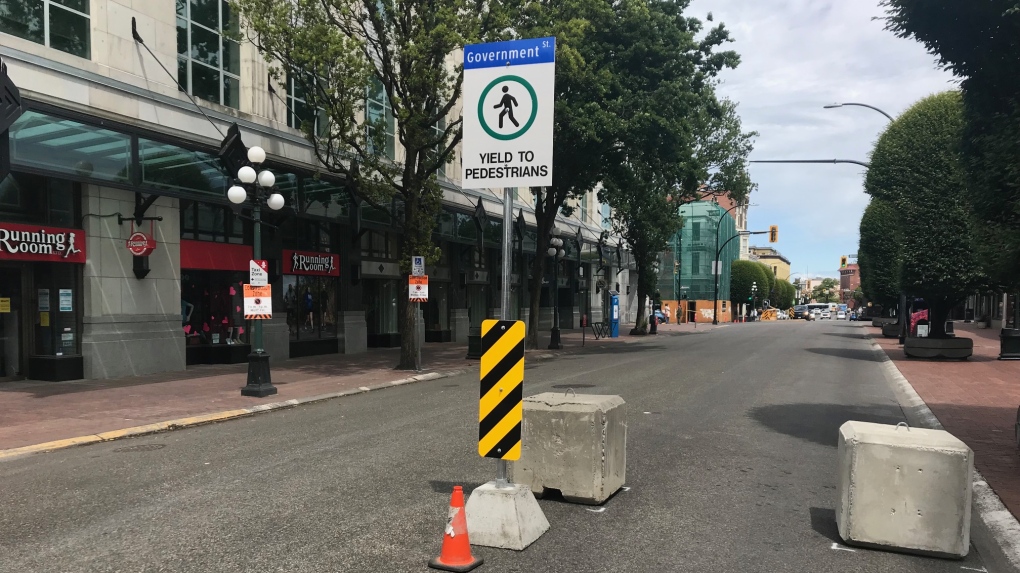 Victoria closed a section of Government Street in downtown Victoria last summer to encourage pedestrian activity during the COVID-19 pandemic.

VICTORIA -- The City of Victoria will temporarily close a section of its downtown to vehicles this summer during the COVID-19 pandemic.

Starting in early June, Government Street will be closed to vehicle traffic between Humboldt Street and View Street from noon to 10 p.m. daily to improve the space for pedestrian and business use.

The city says that this stretch of Government Street will remain open to cars every morning to allow for deliveries and other commuter necessities. New, temporary loading zones and accessible parking stalls will also open beside the closed corridor during these hours, according to the city.

The temporary road closure is part of the city's Build Back Victoria program, which launched last spring during the early days of the pandemic.

A similar road closure took place at the time, which was largely well received, according to the city.

"Build Back Victoria is about supporting businesses and creating more pedestrian-friendly public space for residents and visitors when they return," said Victoria Mayor Lisa Helps in a statement Thursday.

"Providing quick and flexible permits through the Build Back Victoria program is supporting economic recovery for businesses and allows them to safely operate in public spaces in a way that is bringing more vibrancy and vitality to the city," she said.

The city says that back in October, it reached out to community members and stakeholders for feedback on the first year of the Build Back Victoria program.

The majority of the feedback, including more than 8,700 comments, supported the program continuing this year.

"The program is not only helping businesses weather the pandemic, it’s also shown us what’s possible for our city and the public spaces we all share," said Helps.

The summer pedestrian zone will also be used to help the city design longer-term infrastructure changes in downtown Victoria.