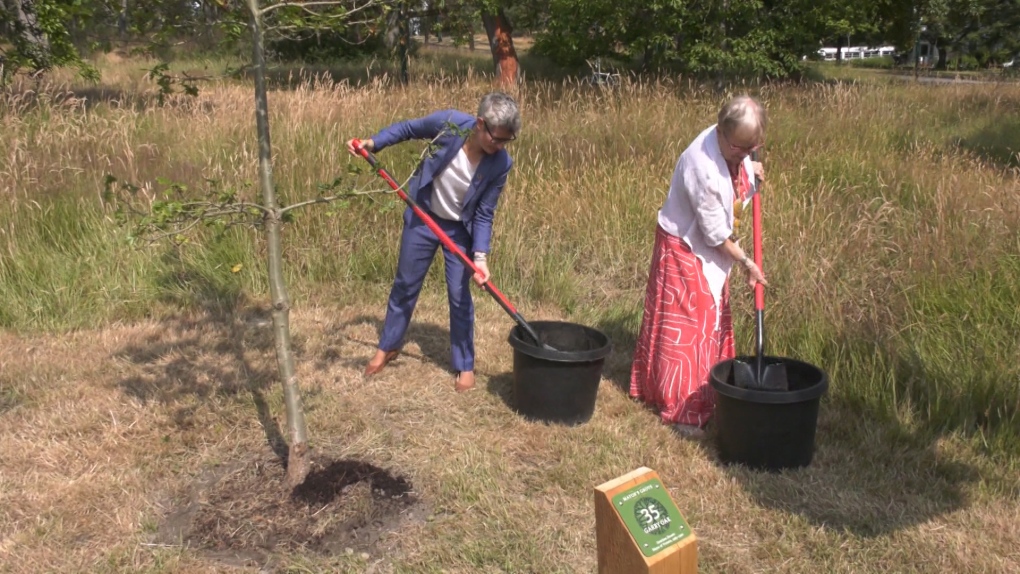 Gretchen Mann Brewin, right, the first woman to be elected mayor of Victoria, plants a tree in the Mayor's Grove with current Mayor Lisa Helps in July 2019. The city has pledged to plant a lot more trees in the next 12 months.

The City of Victoria has joined a global initiative to plant more trees in cities, promising to plant an additional 5,000 trees before the end of next year.

The pledge is part of a newly launched United Nations program called the Trees in Cities Initiative, which asks mayors to set a goal for new tree plantings and then monitors their progress.

Victoria mayor Lisa Helps, who was in New York City this weekend, participated in the launch of the initiative.

“We know there is a climate crisis and we’re committed to everything we can as a city to mitigate the impacts,” Helps said in a release announcing the commitment. “Participating in this UN initiative allows Victoria to join in a global movement of communities. City staff are currently designing ways in which we can harness the power of our community to meet this goal.”

The UN program calls planting trees "one simple yet powerful way of building more sustainable and resilient cities," noting that strategically planted trees can cool the air between 2 C and 8 C.

Such cooling can reduce the need for air conditioning, which helps to reduce emissions. This is in addition to the up to 150 kilograms of carbon dioxide a tree can remove from the air.

The trees Victoria has pledged will be planted on both public and private land in the city. The city plans to spend an additional $1 million annually to speed up the implementation of its Urban Forest Master Plan, which lays out how the city intends to maintain its existing trees and plant new ones.

Victoria is the first city in Canada to participate in the UN Trees in Cities Initiative.