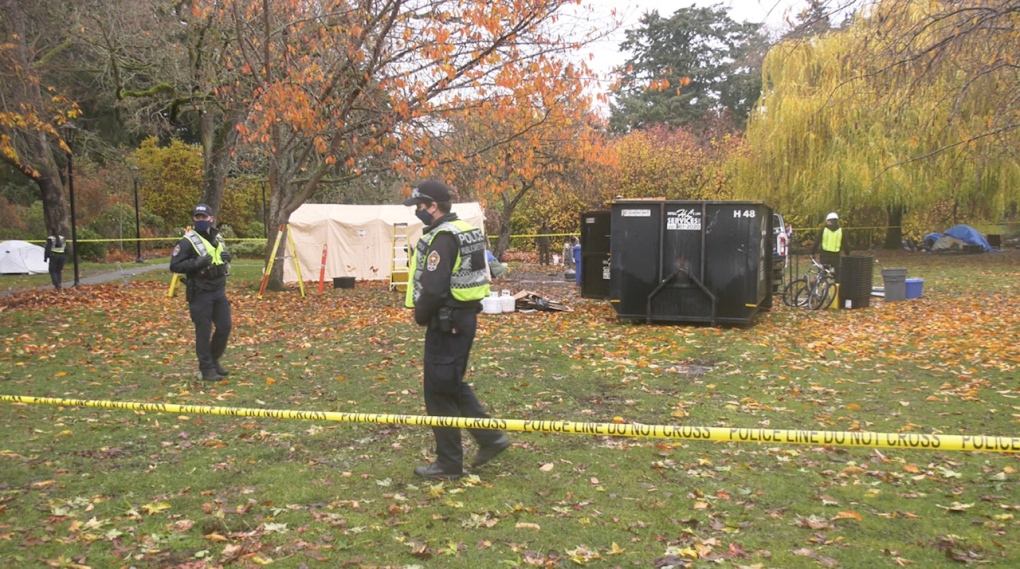 Police and Victoria bylaw officers attend to area where homeless people have been sheltering in Beacon Hill Park. (CTV News)

VICTORIA -- The City of Victoria is petitioning the B.C. Supreme Court to clarify whether Beacon Hill Park can be used to shelter homeless people in temporary structures.

Lawyers for the city are seeking the court’s direction on how the city can operate Beacon Hill Park, which, unlike most city parks, is held in trust by the city under an 1882 grant by the province.

Homeless people have long been sheltering in the park, but their numbers have exploded since the COVID-19 pandemic began.

“Chronic homelessness, a global health pandemic that has closed shelters, mental health and addiction supports stretched beyond capacity – these are modern realities that did not exist in 1882 when the trust was created,” said Victoria Mayor Lisa Helps in a statement announcing the petition Tuesday.

“We need clarity on how this trust affects people’s rights today,” Helps added.

Victoria’s parks bylaw was amended in 2009 to allow sheltering in city parks after the B.C. Court of Appeal ruled that homeless people have a constitutional right to erect overnight shelters in public parks when there is not adequate space in local shelters.

The city says that neither the 1882 grant from the province nor the existing Public Parks Act identify all the activities for which Beacon Hill Park can be used. “The only limitation is that it be maintained and preserved by the City as a public park or pleasure ground,” the city said in its statement.

“As we work closely with the province and our partners to end homelessness in our city, it is important for the city, as (Beacon Hill Park’s) trustee, to have a definitive answer to this question once and for all,” said Helps.