The City of Victoria has opened 14 public misting stations to help manage the heat, as Environment Canada predicts sweltering temperatures in the region this week.

The weather office has issued a heat warning for Greater Victoria, with temperatures expected to reach highs of 29 C during daytime hours for the next several days.

Temperatures are expected to be even hotter away from the water, with inland areas of the island estimated to hit highs of 35 C.

The heat is expected to persist until Friday, according to Environment Canada. In the meantime, Victoria has opened 14 misting stations which will be open during "daytime hours" from Monday through Thursday.

The misting stations are set up on fire hydrants across the city. Victoria has released an online, interactive map highlighting where each misting station is. 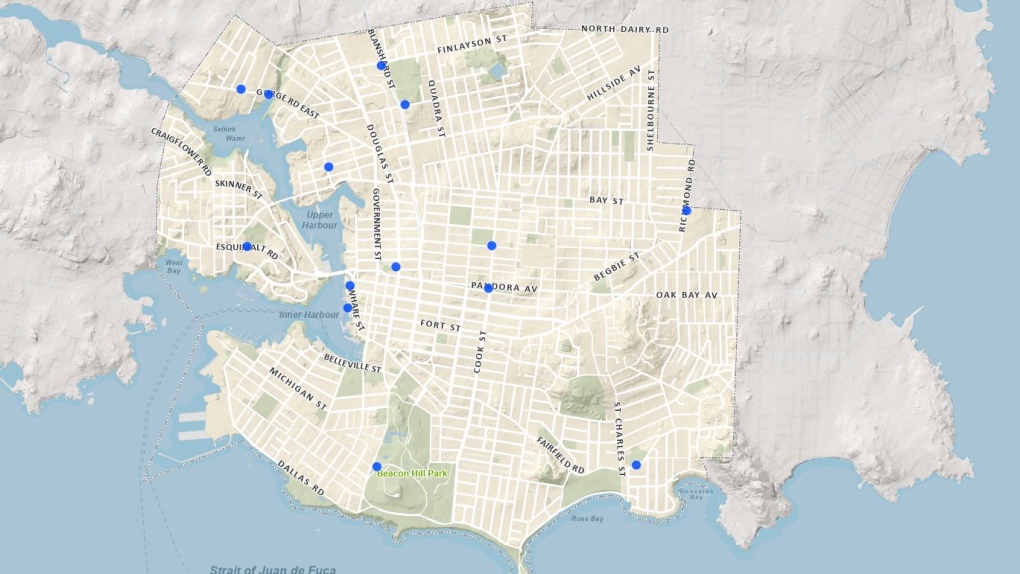 The locations of misting stations in Victoria are pictured. (City of Victoria)

The city also has map of where cooling centers and "other community assets," like water parks, are located.

The municipality notes that it has not activated its city-run cooling centres this week, and that it only opens them when there is an "extreme heat emergency."

The city is reminding residents to take care of themselves and check in with vulnerable people that they know, including people over the age of 65, young children, pregnant people, and those with underlying health conditions.

The city is also referring to the PrepareBC website for tips on how to stay cool during extreme heat.

Some of those tips include drinking plenty of water, keeping windows and curtains shut during daytime hours but opening during the evening when it is cooler, and monitoring for signs of heat stress.

WorkSafeBC has also released its own list of safety tips for workers and employers this week.

The mysterious woman who allegedly lured dozens of migrants on Florida Gov. Ron DeSantis' flights to Martha's Vineyard from San Antonio has been identified by several media outlets as a former combat medic and U.S. Army counterintelligence agent living in Tampa.

A new project called '4000 Cover Stories' is re-imagining the stories of missing and murdered Indigenous women and girls in Canada with the front-page prominence their families feel they deserve, with advocates planning to deliver the massive newspaper to the prime minister.