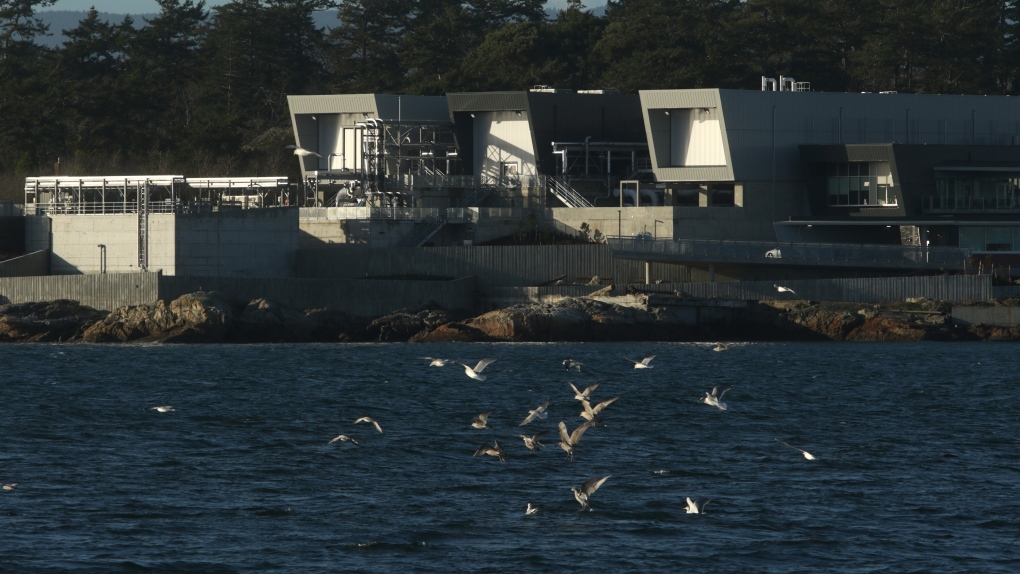 The McLoughlin Point Wastewater Treatment Plant in Esquimalt, B.C., is seen on Friday, January 8, 2021. The Greater Victoria area no longer uses surrounding ocean waters to flush away raw effluent now that a $775 million sewage plant has started treating the equivalent of 43 Olympic-sized pools of waste daily. THE CANADIAN PRESS/Chad Hipolito

VICTORIA -- The Greater Victoria area no longer uses surrounding ocean waters to flush away raw effluent now that a $775 million sewage plant has started treating the equivalent of 43 Olympic-sized pools of waste daily.

The opening of the system was recently celebrated online by political and environmental leaders after decades of effort to get a sewage treatment plant.

“As a born and raised Victorian, I've been contributing to this problem my entire adult life,” he said. “I'm happy to say I'm not doing that anymore.”

Inslee called the treatment plant a “remarkable achievement,” saying he was wondering why the water near his home “looks so clean.”

Victoria's discharge of raw sewage had been a political irritant between the two jurisdictions including threats of a tourism boycott in the 1990s by groups in Washington state.

The state pledged to support Vancouver's bid to host the 2010 Winter Olympics in exchange for B.C.'s promise to treat Victoria's sewage.

The ongoing pressure from Washington and local groups kept the sewage issue at the forefront, said Colin Plant, chairman of the Capital Regional District, which represents 13 area municipalities and three regions.

“There's no doubt the external input that the United States, in particular the state of Washington, had on the federal and provincial governments was influential in making the province and the federal government come forward with regulations we had to meet and adhere to,” he said in an interview.

Unique local efforts to clean up sewage treatment in Victoria also helped bring the treatment plant to completion, said James Skwarok, who became known as Mr. Floatie because he appeared at public events dressed in a brown suit that resembled excrement.

“I thought, that's what we need, we need a seven-foot tall piece of excrement walking around singing, dancing, shaking hands, mingling with the tourists to raise awareness and to put pressure on local officials,” he said.

Skwarok said his costume is now in storage at the Royal B.C. Museum.

Plant said the regional district was mandated by the federal and B.C. governments to implement sewage treatment by Dec. 31, 2020. The plant in Esquimalt was paid for by all three levels of government.

“What it means for our region is we are treating our waste water like every other North American coastal city,” said Plant. “It was ethically wrong to just dump raw sewage into the ocean.”

“We've outgrown the treatment capacity in many cities,” he said, adding that cities in Canada still dump more than 200 billion litres of untreated sewage into the country's waters annually.

Plant said he has never met Skwarok, but the two school teachers share what it's like to be a mascot. During Victoria's Commonwealth Games in 1994, Plant said he worked as the event's official mascot, dressing as Klee Wyck, a friendly orca known as the “laughing one.”

“If you think about it, I was portraying one of the orcas that may or may not have been living in those waters that were being contaminated by Victoria waste water,” he said.

This report by The Canadian Press was first published Jan. 9, 2021.