Parks Canada and the Royal Canadian Navy are paying homage to Victoria-area veterans at Fort Rodd Hill in Colwood.

The ceremony Friday was to honour Second World War Navy veterans, specifically Alice Adams and Trevor Shuckburgh, who are both 97 years old. It also paid tribute to all the "hometown heroes" who fought on D-Day and the Battle of Normandy 75 years ago.

A vintage cannon was fired and the Navy's Naden Band opened the ceremony as hundreds of students, military personnel, community leaders and B.C. Premier John Horgan looked on.

“I think it’s absolutely amazing," said Adams. "I think it’s a wonderful thing that the school children are here – that’s the most important part of it."

B.C. Lieutenant Governor Janet Austin and other dignitaries offered words of recognition and a presented a plaque to Adams and Shuckburgh.

“I think, for the children, if they have a good memory, they’ll just carry this along and there will be a day come along and they will say, 'I remember,'" Schuckburgh said.

The flyover of a vintage war plane segued into a boot-laying ceremony. 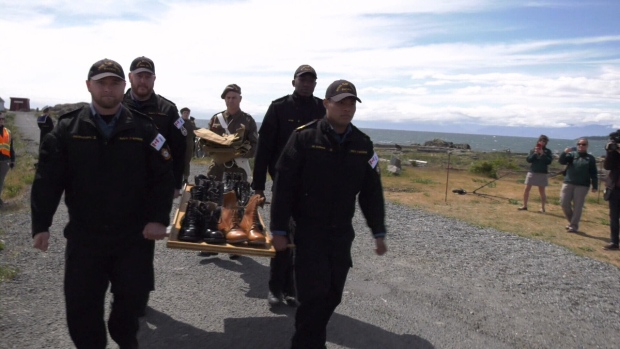