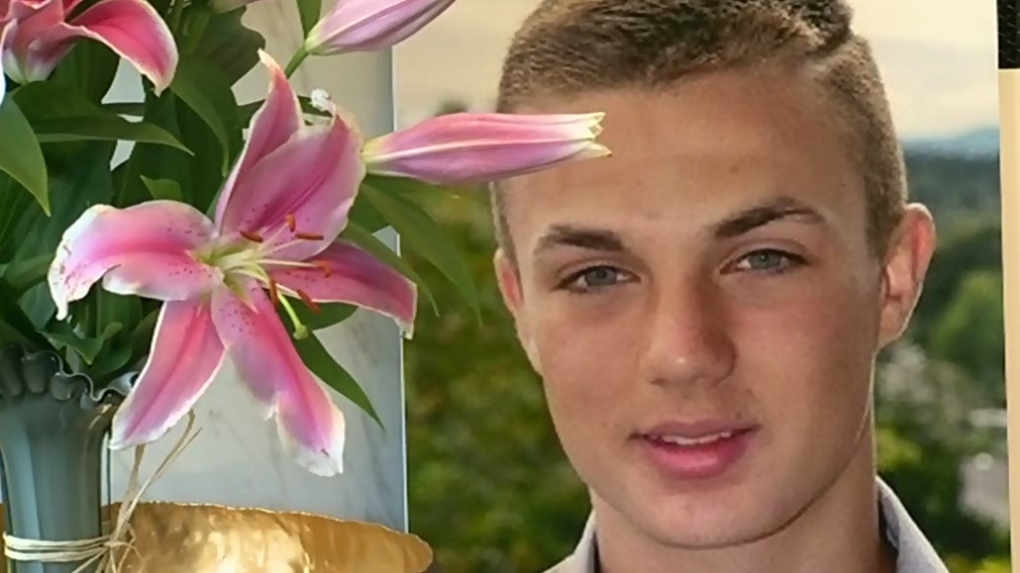 Elliot Eurchuk was 16 when he was found unresponsive on his bed at his family's home last April. (File photo)

Rachel Staples let out the dog, started brewing coffee and then immediately felt panic as she walked up to her son's room on April 20 last year, she told a coroner's inquest Monday.

“He clearly was gone, but I didn't know for how long,” Staples told the inquest into the death of 16-year-old Elliot Eurchuk. “I pumped the naloxone into his thigh, but I know he was gone. He'd been long gone. Of course I screamed, 'Help.' ”

The British Columbia Coroners Service called an inquest in March, saying the public has an interest in hearing the circumstances of the death of the Victoria-area teen, and that a jury would have the opportunity to make recommendations to prevent similar deaths.

Staples is the first witness to testify at the inquest, which is scheduled for eight days and expected to hear from more than 40 witnesses.

She told the five-person jury about her family's efforts to help their son recover from serious sports injuries that resulted in him becoming addicted to pain medications and eventually street drugs.

Staples is a dentist and also a mother to two sons younger than Eurchuk. During her son's ordeal she was receiving chemotherapy to treat breast cancer, she said.

She said she was shocked in 2016 to discover her son had sedation drugs from her dental office stashed in his bedroom.

Back then, she suspected her son was perhaps smoking marijuana, but had no idea about other drugs.

The mother said she watched him slide over three years from engaged student and talented athlete to drug-sick teen who couldn't take a family bike ride without stopping to vomit due to his withdrawal symptoms.

“I don't think anyone can understand the desperation,” said Staples, wiping tears from her face. “I wanted to help my son. I wanted my family to be on the same page so we had a chance of saving our boy. I was desperate.”

Eurchuk was admitted to hospital for a blood infection, which a doctor suggested was a condition suffered by intravenous drug users, but health officials also told the family many details of their son's medical information were confidential, she said.

Staples said she told a medical official the family was considering tricking Eurchuk into entering a treatment facility in the United States, but she was informed that would be breaking the law.

In the months before his death, she said the family called police to have Eurchuk apprehended under B.C.'s Mental Health Act, which allows such detentions if there is concern the person could harm themselves or others.

Staples said that move was a failure.

“It was not a place I would take my dog,” said Staples. “He was locked up for a week.”

She said the family was not provided with any information about his condition or the treatment he received, and when he was discharged he accused his parents of betrayal.

“We were lost,” Staples said.

Coroner's counsel John Orr told jurors the inquest wouldn't be a fault-finding exercise, but that they may have to determine if Eurchuk's death was accidental or intentional.

Staples said her son had mentioned death in the past, but only once to her.

No final note was found in Eurchuk's bedroom or at the home. Staples said she also checked his recent school work and there were no signs his life was coming to an end.

“The last two weeks of Elliot's life, he was positive. I saw a boy who was really trying. But I also saw a boy who needed opioids in his system. He would vomit in the bathroom.”

Brock Eurchuk, Elliot's father, testified he was not initially as convinced as his wife of his son's growing drug dependency.

“I did not believe he was a regular user of street drugs,” said Eurchuk, whose testimony continues Tuesday.

That changed in February 2018 when his son was found unresponsive in his hospital bed at Victoria General Hospital where he was being treated for the blood infection. The teen was revived with Narcan, an opioid overdose medicine.

“That was the hammer on the head,” he said.