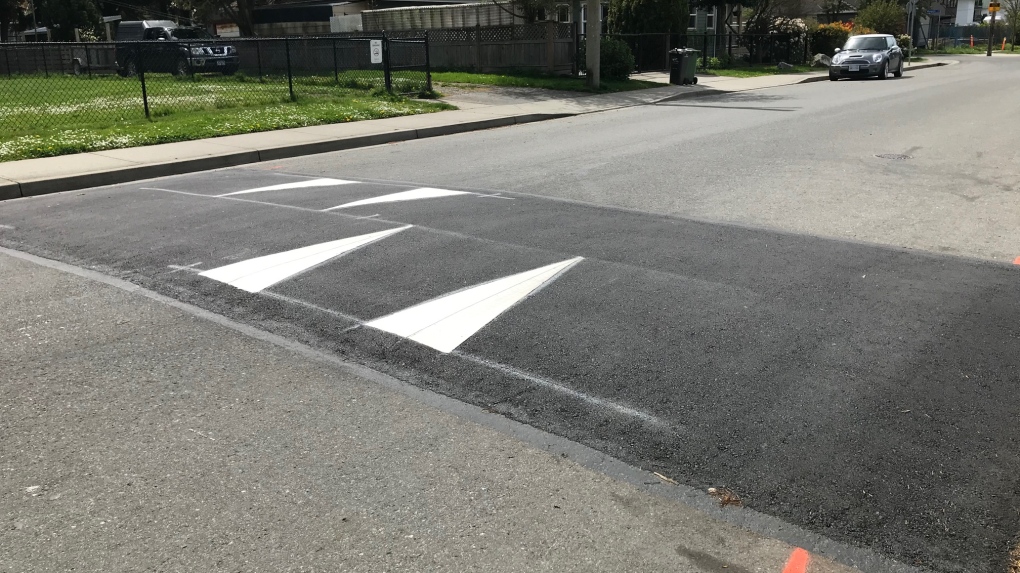 With traffic volumes in Victoria reduced due to COVID-19, the city has expedited its plans to improve road safety near schools, parks and playgrounds: (CTV News)

VICTORIA -- The City of Victoria is focusing on reducing vehicle speeds in neighbourhoods this spring after concerns were raised about cut-through traffic, speed and volume issues from residents and neighbourhood groups.

After collecting data on traffic speed, volumes and flow on local streets throughout the city, the municipality has now moved ahead with phase one of the Neighbourhood Traffic Calming Program.

The extensive program has been expedited this year with Victoria city council approving an additional, one-time capital funding of $250,000, plus the annual Neighbourhood Traffic Management Plans funding of $160,000.

Speed humps have been installed on eight streets so far. They are just one part of the traffic calming program, says the city. Other elements will include speed reader boards, enhanced school zone safety and traffic diversions.

Improved signage and adjusted 30 km/hr zones will also be implemented around all elementary schools and nearby parks in order to enhance visibility and overall road safety.

Fifteen speed reader boards will be installed in various communities to slow drivers down on arterial and collector thoroughfares within neighbourhoods. The locations of the reader boards were chosen following consultation with the Neighbourhood Associations.

City staff will closely monitor and review traffic patterns as the plan moves forward, as changes on one street can lead to shifting traffic on another street.

One resident we spoke with in James Bay was extremely pleased with how well the speed humps were working on Montreal Street, near a playground and park.

“People use to really speed down this street and it would be 60 km/h or 70, it would be so fast,” said the resident.

“Now people are slowing down, or if they don’t notice it, they definitely slow down after.”

She says she is grateful for the speed humps, something people in the area had been asking for due to ongoing concerns about speeding cars and trucks.

The city says it will continue to identify future road safety projects in order to ensure they are budgeted for in upcoming budget submissions that are reviewed by city council.

Since the beginning of April, speed humps have been installed at: