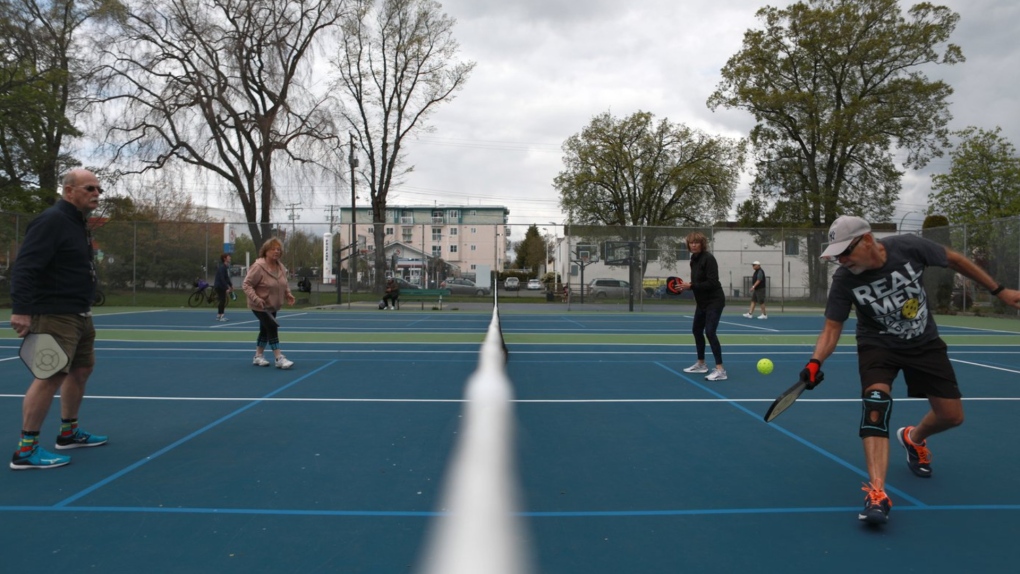 From left to right, Tony Gibb Joanne Rakers, Tania Brachmayer and Peter Brachmayer, play a game of pickleball at a court in the Central Park neighbourhood of Victoria, B.C., on Thursday, Apr. 28, 2022. THE CANADIAN PRESS/Chad Hipolito

The Victoria Regional Pickleball Association (VRPA) says more than 160 players from across the province and even the U.S. are coming to Victoria to participate in a tournament this weekend.

The Victoria Classic 2022 Pickleball Tournament is taking place at the GR Pearkes Recreation Centre from Friday to Sunday, with 162 players registered to compete.

Players are coming from as far away as Campbell River, Salt Spring Island, the Lower Mainland and "even Oregon and California," according to the association.

"Pickleball has generally been associated with the over 55 age group. However, at the Victoria Classic 2022 many younger players will be competing," said the VRPA in a release Thursday.

The tournament will begin on Friday evening with singles games from 5 p.m. to 8 p.m.

The event is free for spectators to watch, and organizers will check for vaccine cards at the entrance.

VRPA president Connie McCann says she's "excited about the level of play that will be on show this weekend" and that spectators should expect some heated competition in the first tournament to be held in Victoria since the pandemic began in 2020.