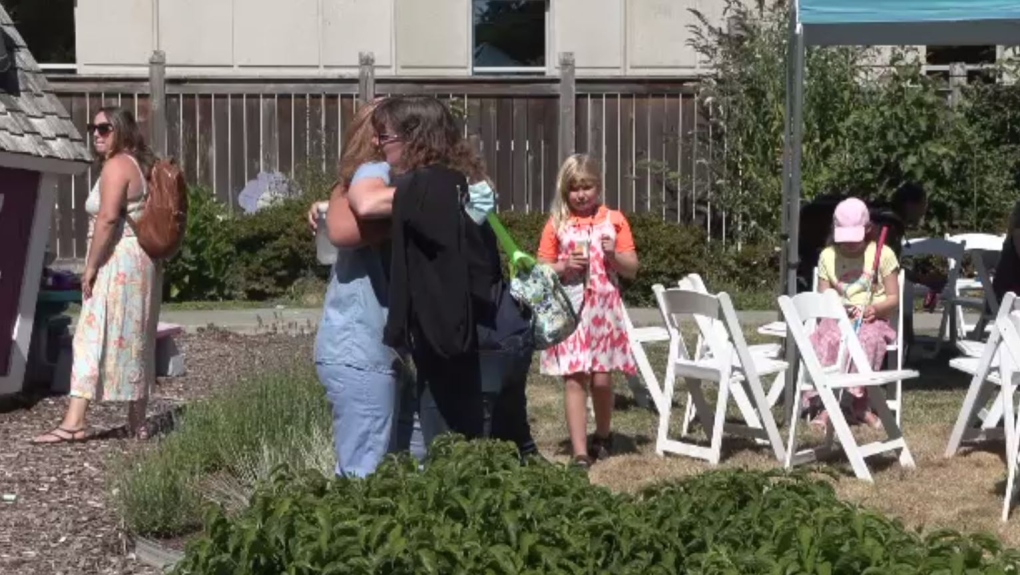 There was a reunion at Jeneece Place for "graduates" of Victoria General Hospital’s Neonatal Intensive Care Unit (NICU) on Thursday.

Sharing hugs and smiles and even some tears, nearly 200 parents and kids gathered to reunite with doctors and nurses from Victoria General Hospital who helped care for the newborns.

The celebration included entertainment, cupcakes, snacks and even a View Royal firetruck.

The annual event started in 1984 and was put on hold during the pandemic for the past two years. Thursday's event was the 36th reunion since it began.

The gathering offers families and medical staff a chance to share the successes and difficult times of caring for premature and high-risk babies.

"It’s a very nice way of celebrating. It’s also a nice day of remembering the ones who didn’t make it. It’s a tough journey," said Münire Erman, manager at Victoria General Hospital for acute obstetrics and neonatal services.

"It’s good for us as a team to touch base with the little ones and to see them all grown. it really creates a connection," said Erman.

'ALWAYS BE OUR FAMILY'

Kerri Roberts attended the event with her two daughters on Thursday. One of her daughters, 11-year-old Abby, was in the NICU for 155 days.

"I’m always happy to come here and just show them everything that they gave us," Roberts said as she pointed to Abby.

"Even 11 years later they are still taking care of us and that’s why they will always be our family," she said, referring to the doctors and nurses that helped save her child’s life.

"They aren’t just about the babies," Roberts added. "It’s about handling us as parents as well through our toughest times.”

Gillian Kozinka, the director for Victoria General Hospital’s clinical operations, is a former NICU nurse and was alongside Abby and her family throughout their ordeal. She says it’s emotional for everyone involved.

"The bond that is created between the families and the staff, when the families are in this very critical time in their lives, is very meaningful and very lasting," she said.

Victoria has approximately 2,500 to 3,500 births per year. Of those, approximately 450 to 550 babies end up being admitted into the Neonatal Intensive Care Unit.

The annual NICU reunion party happens on the second Thursday of every August.

A day after post-tropical storm Fiona left a trail of destruction through Atlantic Canada and eastern Quebec, residents of a coastal town in western Newfoundland continued to pick through wreckage strewn across their community, easily the most damaged area in the region.

A search is underway in southwestern Newfoundland for a woman who was reportedly swept out to sea after a wave struck her home during post-tropical storm Fiona.

The Ukrainian Defence Ministry on Sunday ridiculed Moscow’s partial mobilization to bolster its forces in Ukraine, posting on Twitter a mash-up of social media videos of Russian police beating and arresting men protesting the call-up.