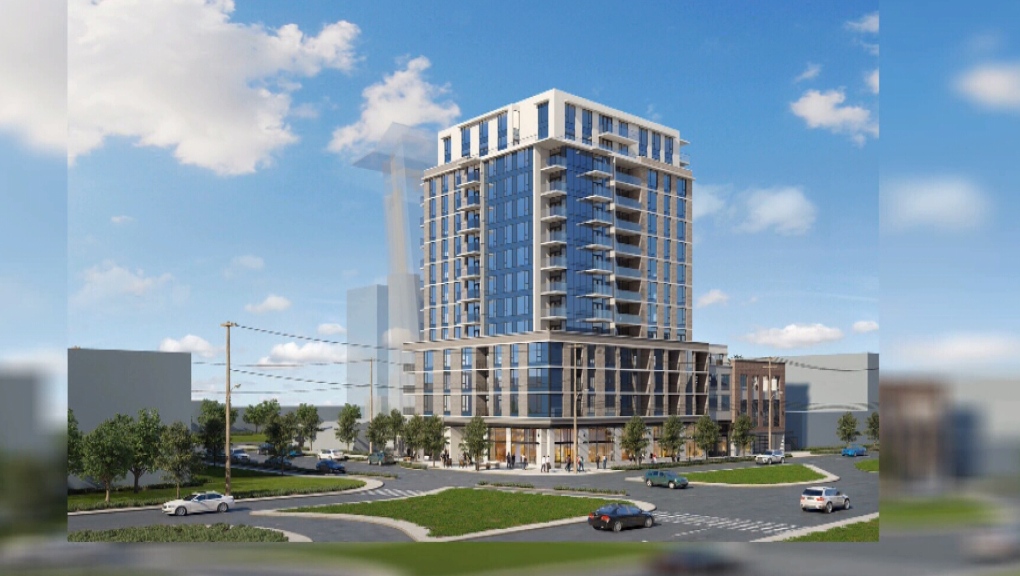 The building proposed for downtown Victoria would be made up of 54 co-living units and 67 traditional units. (Townline)

VICTORIA -- A creative housing solution could be coming to Victoria’s downtown. Development company Townline is proposing a 15-storey tower for the corner of Pandora Avenue and Vancouver Street.

The building would be made up of 54 co-living units and 67 traditional units.

“The co-living, we refer to as a pod,” said Chris Colbeck, Townline’s senior vice-president of development sales and marketing. “And those pods consist of three-, four- and five-bedroom homes.”

Each of the pod tenants would rent a singe bedroom and have access to shared living space. The units would be furnished, include all utilities, and come with Wi-Fi and housekeeping services. Premium bedroom rentals would also have their own en-suite bathrooms.

“It integrates high-quality rental rooms with communal living spaces,” said Colbeck. “A furnished bedroom would be approximately 30 per cent less, than say, an unfurnished market studio.”

It’s an idea that has worked for some of the largest cities in North America, and Townline believes it could be a practical solution for Victoria’s rental shortage.

“We’ve done about three years of research here,” said Colbeck. “We’ve gone to New York, L.A…. had a lot of conversation with two of the largest co-living operators in the U.S.”

The idea is also being supported by the City of Victoria.

Last week, city councillors voted to send the proposal to a public hearing.

“I think it could be a great new addition to housing in Victoria for people looking to build community and live in the community, even while living in a downtown tower,” said Helps.

Townline admits co-living is not for everyone, but says this development does come with some attractive options.

“These individuals are drawn to the lifestyle offered by co-living which includes high-quality amenities and scheduled events,” said Colbeck. “And the chance to be part of a community.”

Townline says it’s far too early in the planning stages to talk about breaking ground, but if the process goes smoothly, work on the tower could begin next year.