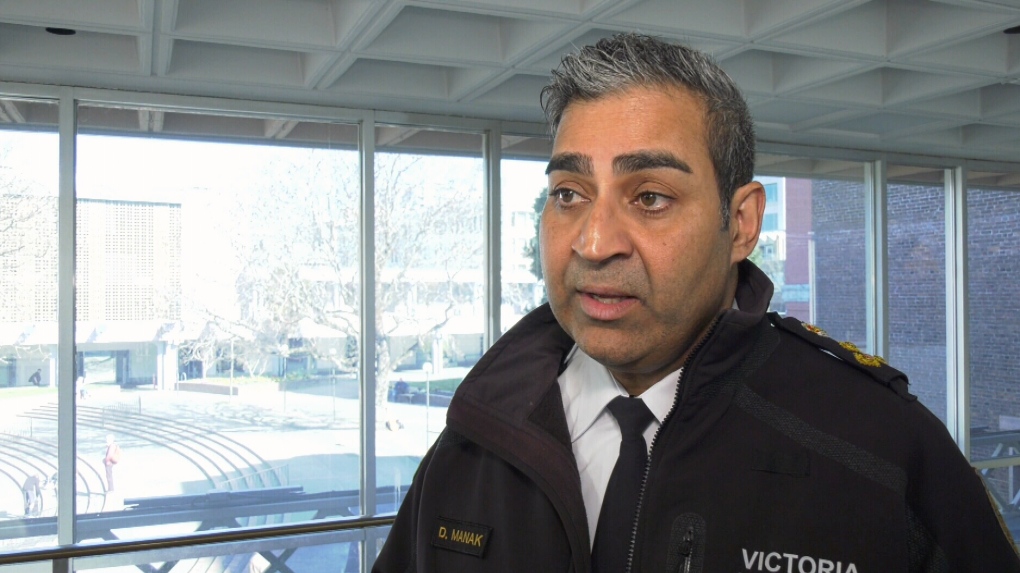 The staffing shuffle is required to accommodate for frontline officers who cannot work due to injuries, according to VicPD Chief Del Manak. (CTV Vancouver Island)

In a 6-3 vote Wednesday, Victoria city council moved the ball forward on a police budget stalemate that has generated much controversy over the past few months.

Council approved adjustments to the Victoria Police Department budget, avoiding the layoffs of VicPD employees. The decision will also reduce the city’s projected tax increase from 4.3 per cent to 3.9 per cent.

“Council has delivered a reduction in the projected tax increase without any layoffs,” Coun. Ben Isitt said in a press release after the vote. “This demonstrates that we can pursue fiscal restraint in policing expenditures without compromising public safety.”

He went on to say, “Victoria council’s direction to the Victoria and Esquimalt Police Board proposes a shift from layoffs proposed by the Police Chief toward savings in non-staffing expenditures. It also avoids a costly tax increase to taxpayers by avoiding allocating new funding to cover the cost of the Employers Health Tax and the hiring of new officers mandated by the province.”

Victoria police Chief Del Manak said he was relieved that council made a compromise that would not lead to any layoffs.

“Although it’s great we’re not going to see layoffs and reduction in our staff, we still did not get what we were asking for and those were critical positions in our police department that provide great front line service in order to keep our community safe,” Manak said.

VicPD had originally proposed a $2.6-million budget increase that would have seen the hiring of an additional six police officers and one administrative position.

The department also wanted to continue funding two frontline officers that are part of an ongoing pilot project called ACT (Assertive Community Treatment). The future of that pilot project maybe up in the air now, according to the chief.

Initially, police were only granted a $1.6-million increase in funding that, according to Manak, would have possibly resulted in a loss of positions in the department.

The department has not increased the number of police officers in eight years and says it is struggling to keep pace with increased demands on its services.

Victoria Mayor Lisa Helps, who also chairs the police board, did not vote in favour of the compromise.

“I didn’t vote in favour of council’s decision today but I think it’s a better decision than the one that was on the table before,” she said.

Helps said she is pleased there won’t be any job losses but is disappointed that there will not be an increase in additional officers as requested by the chief. The city and the region are growing and the police board recognizes the need for increased policing resources, she said.

The budget will now go back to the Victoria and Esquimalt Police Board on Monday to determine the next steps.