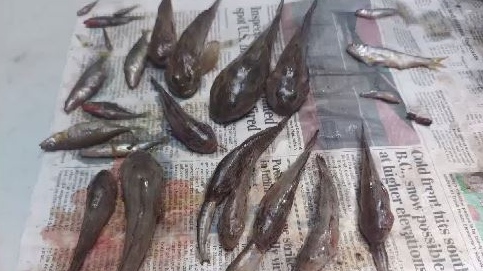 Hundreds of dead fish were found in Reay Creek in Sidney, B.C., in June 2021. (Submitted)

Environmental compliance officers have fined a Victoria exterior washing company $11,000 for releasing a roof de-mossing agent into a creek in Sidney, B.C., killing hundreds of fish.

Elevate Exterior Washing Ltd. was found to have discharged the solution of bleach and surfactant into Reay Creek last year, causing the deaths of more than 300 fish and other creek-dwelling organisms, according to an environmental compliance action filed by the B.C. government on June 20.

The discharge affected a 150-metre section of Reay Creek downstream of a stormwater outfall on Wesbrook Drive in early June 2021.

A Sidney fishing association raised the alarm about the spill on June 7, 2021, telling CTV News that 320 cutthroat trout and several coho salmon were found dead.

Grant MacPherson with the Sidney Anglers Association called the incident catastrophic, and said the loss of the cutthroat trout specifically would alter the creek ecosystem for years to come.

Nathan Bancroft, a co-owner and general manager of Elevate Exterior Washing Ltd., told CTV News he accepts full responsibility for the spill, which he called "an accident on our end."

Bancroft and his co-owner were not involved in the company at the time of the incident, having only taken ownership in January of this year, he said.

"One of the vans had a malfunction and leaked into the creek," Bancroft said. "I take full responsibility for it."

The co-owner said the previous ownership of the company paid the fine and Bancroft said Elevate has implemented training for its staff to ensure a similar spill cannot happen again.