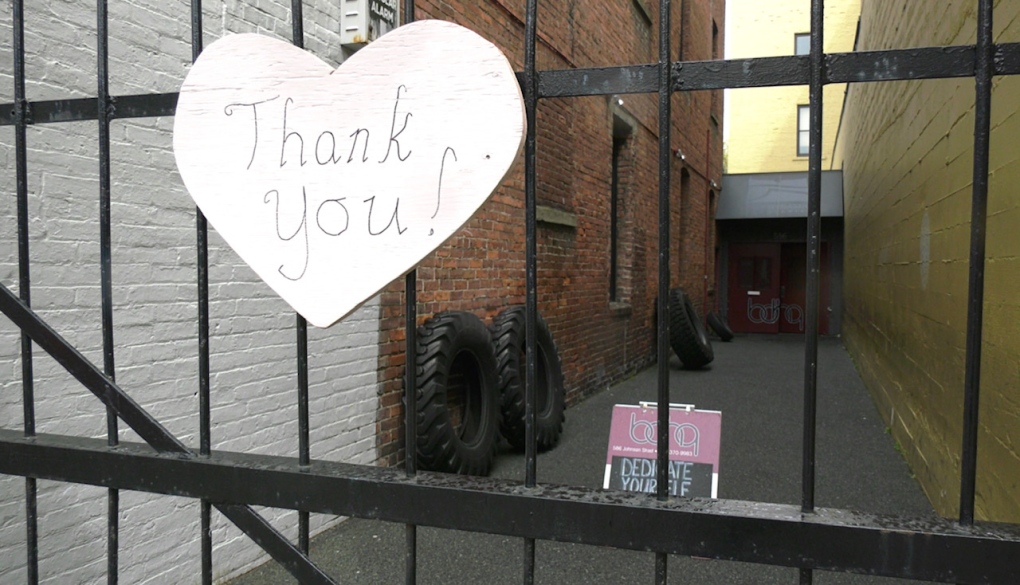 More than $10,000 has been raised for Body Dynamics Headquarters, a local gym in downtown Victoria that was forced to close due to COVID-19: (CTV News)

VICTORIA -- Many local businesses are struggling to stay alive amid the COVID-19 pandemic. Forced closures or restrictions on physical distancing are all putting tremendous weight on businesses and the people that own them.

Body Dynamics Headquarters (BDHQ) on Johnson Street is one of those businesses facing immense pressure in downtown Victoria. The boutique gym used to offer everything from strength training to spin classes to personalized training sessions and more. But, all that changed due to the pandemic.

Jason Ball, owner of BDHQ, has had to stretch his budget, exercise financial constraint and be creative in order to keep from going under.

He says it’s tough because he knows what his costs are for rent and bills going out, but never knows what is going to come in financially; and these days it’s not much.

Ball has had to be creative by offering online classes and renting out his spin bikes and other fitness equipment just to try to lift the financial weight off his shoulders.

He tells CTV News that he wonders about the gym’s future.

“Are we going to reopen? What’s going to happen when this is all over and done with?” he said. “We are just going day by day right now.”

With gym closures stretching on in B.C., friends, family and the fitness community stepped up to help save BDHQ and give back to the man they say has given them and the community so much.

On April 15, a GoFundMe campaign was started without Ball knowing about it. The fundraiser’s goal was to reach $10,000 for the gym.

“This campaign is an expression of how much BDHQ, Tristars, November Project and Westcoast Running mean to the huge family that comprises them,” reads a post on the GoFundMe page.

“Even more, it's an expression of how much Jason has personally contributed to the success, healing, confidence, growth and community that's grown around his leadership and friendship. We love you buddy!”

Yesterday, a surprise visit from his girlfriend and a few others at the gym brought tears to Ball’s eyes when they revealed what the community had donated to support him and the gym. He was blown away, leaving him almost speechless.

“It just helps out so much in such a time when everybody is in the same situation,” said Ball.

“Everybody is struggling, everybody is having a tough time. To be able to generate that amount of money to help support me and to support the business and to support what is happening is unbelievable and I just can’t thank everybody enough, like – wow!”

With his eyes watering, Ball says that doesn’t have the words to express his gratitude to the community.

“It was a pretty special day....it was amazing,” he said.

Ball says he had no idea he had that kind of impact on the community after reading all the messages left for him on the fundraising page.

He himself has participated in numerous fundraisers around Victoria benefiting different charities and organizations but never thought he would be the recipient of one.

He says the funds raised will go a long way to ensure the gym will reopen in the future.

In the meantime, Jason is taking the time to do some minor renovations and touch ups around the gym. Getting it ready for the day he can open his gym doors and his arms wide open to gym members and all those who support him.