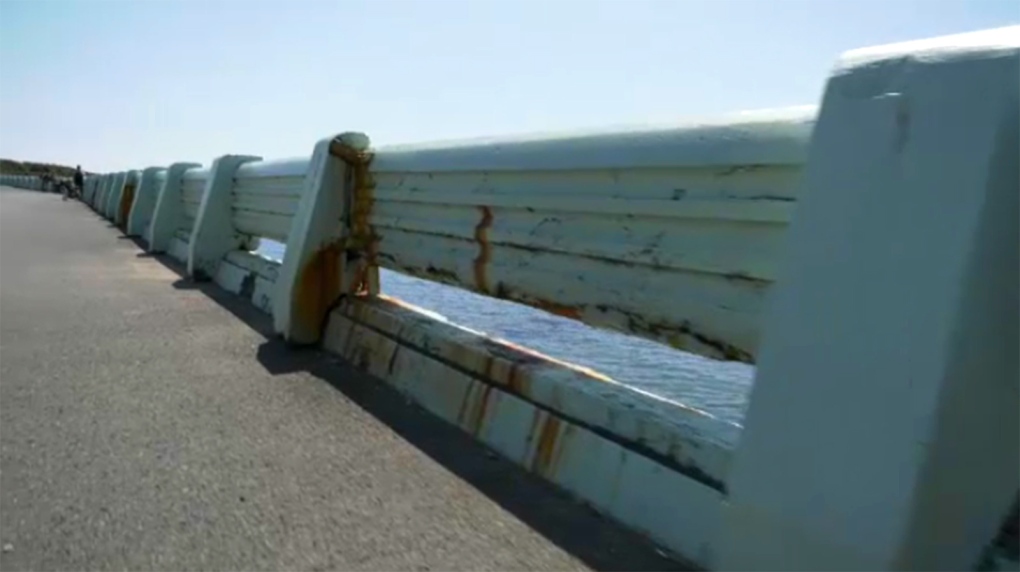 The blue railing along Dallas Road is at the end of its life and should be replaced, city staff say. Aug. 6, 2019. (CTV Vancouver Island)

A report from City of Victoria staff is recommending a colourful concrete railing that lines the Dallas Road Waterfront be replaced.

City staff are recommending a full replacement of the blue balustrade with a new modern steel stanchion and cable design.

According to staff, the existing concrete railing, which measures about half a kilometre, is beyond the end of useable service and requires major repairs and improvements.

"It was built back in 1957 and its coming to the end of its serviceable life," said Phillip Bellefontaine, Assistant Director of Transportation for the City of Victoria. "That's showing itself with rust stains, we've done some strapping on different locations along the way to keep it safe, but a decision needs to be made to replace it."

The detailed report explains that the improvements will be the best way to ensure safety in the long-term.

Bellefontaine said staff looked at different options of replacement, including ongoing repairs to the barrier, but they are becoming increasingly expensive.

"That's becoming less and less sustainable, so we've looked at other options and the one that staff favour is a full replacement of the wall with a railing system that is found all over Victoria," he said. "This is by far one of the cheapest ways forward, because as soon as you put new infrastructure in, your maintenance costs year-on-year are very much less."

Similar steel stanchions are found on the West Songhees Walkway and at the Ogden Point Breakwater.

Construction of the railing would be finished earlier then originally planned by coordinating with current wastewater treatment project improvements.

If approved, council must amend the 2019 financial plan and add $150,000 to make the project happen.