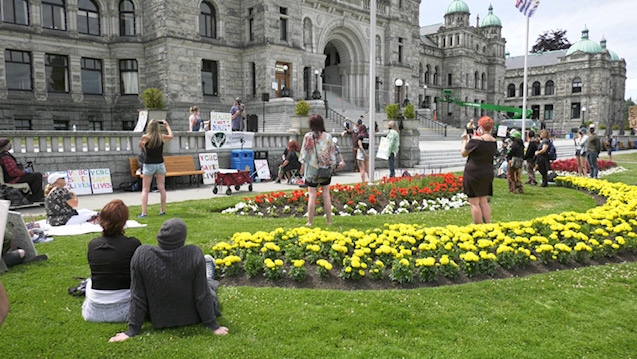 Members of the Victoria Cannabis Buyers Club held a rally on the steps of B.C.'s legislature after it was raided by the provincial government: (CTV News)

VICTORIA -- One day after the Victoria Cannabis Buyers Club was raided by the provincial safety unit for a second time – and had its products confiscated – club members rallied on the steps of B.C.’s legislature.

Members say they are hoping to bring change to the province’s medical cannabis system.

“This is a complicated political chess game that we’re engaged in that’s never been done before,” said Ted Smith, founder of the Victoria Cannabis Buyers Club.

“Trying to get our club an exemption is a difficult and tricky path.”

Smith says the club needs an exemption from Health Canada in order to continue operating as a non-profit.

According to Smith, the Victoria Cannabis Buyers Club, which was founded in 1996, offers a wide range of medical cannabis products to its 8,000 members at a lower price than retailers.

One of those members, Suzan L’heureux, says the service the club provides is crucial for members like her.

“I used to go to a little store and it was $29 for these joints I use to get. Now they’re $63, so that’s a big jump when you don’t have money, you’re sick and you’re struggling,” said L’heureux.

The Victoria Cannabis Buyers Club was first raided by the B.C. government in November. After that first raid, Victoria city council sent a letter to the provincial government asking that the club be exempt from the current laws around the sale of pot.

Now, the club hopes the city will support them again.

“(We’re hoping) to get the city council to pass a motion to go to the federal government now to push for a meaningful dialogue to get an exemption for our club,” said Smith.

Smith says he’s tried to reach out to the federal government on his own but has heard nothing back.

“I’m already trying to get my head around how to crack Health Canada open here but they’re so far away and so caught up in other matters it’s going to be tough,” he said.

The Victoria Cannabis Buyers Club reopened Thursday with new stock for its members.