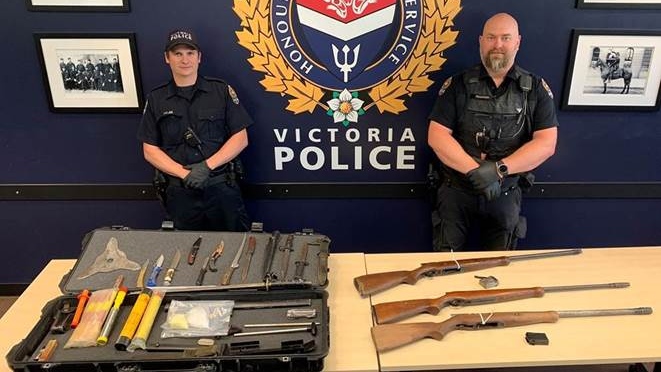 Police say that three guns and dozens of weapons (pictured above) were seized Tuesday morning: (VicPD)

VICTORIA -- Victoria police officers seized a number of firearms, weapons and illicit drugs in a traffic stop on Tuesday morning.

The incident occurred at approximately 10:30 a.m. in the 200-block of Gorge Road East.

Police say that officers spotted a suspicious vehicle with three people inside, two men and a woman.

Officers then examined the vehicle and determined that it was unsafe for road use as it had “critical vehicle defects.”

Police then conducted a search of the vehicle and found three firearms and roughly 300 hydromorphone pills inside.

“In addition, the officers located a case which contained approximately a dozen knives, swords, improvised weapons, and dischargeable flares,” said the Victoria police department in a release Wednesday.

The vehicle has since been towed. Police say the investigation is ongoing.