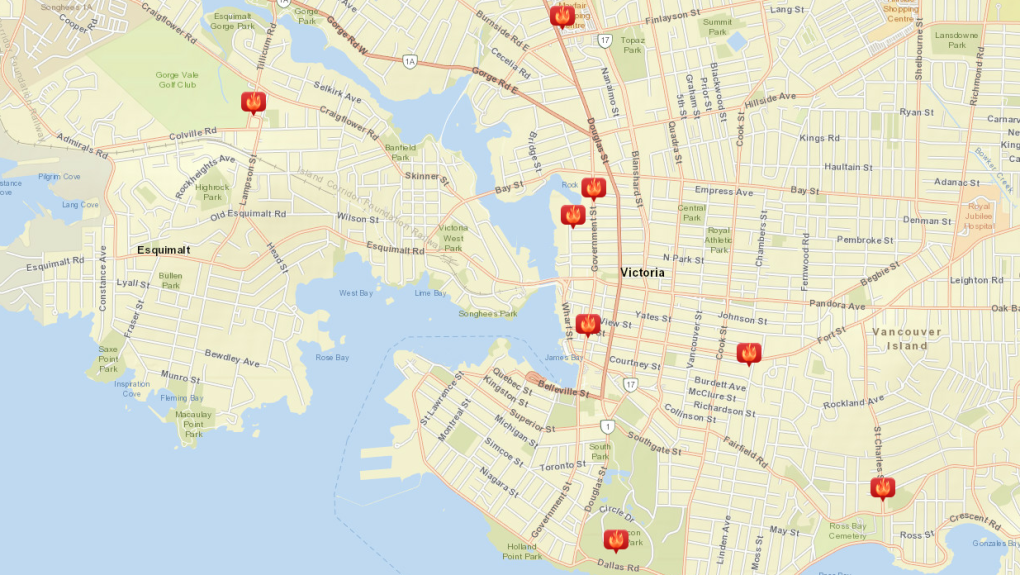 The Victoria Police Department is investigating 9 suspicious fires that were lit in March and early April: (VicPD)

VICTORIA -- The Victoria Police Department is investigating nine recent suspicious fires that were lit in the Victoria and Esquimalt areas between March 5 and April 9.

All of the fires are believed to have been set intentionally, though police are uncertain if they are connected at this time.

The first two fires occurred on March 5 at approximately 3:20 a.m. Police were called to the 600-block of Courtenay Street in downtown Victoria for reports of a garbage can on fire.

Shortly after that fire, officers were called to the 600-block of Fort Street for reports of another garbage fire.

Police say both garbage cans sustained damage from the flames.

The third fire took place at roughly 11 a.m. on March 10. VicPD was called to a construction site in the 1100-block of Colville Road for reports of a sign on a fire. One plastic sign was damaged by flames, say police.

On March 20, police were called to a fourth suspicious fire. Officers were called to the intersection of Rockland Avenue and Linden Avenue for reports of fiery cardboard boxes blocking the roadway. Police say nothing besides the boxes were damaged by that blaze.

The fifth suspicious fire occurred at roughly 11 a.m. on March 28. Police say they were called to a vehicle fire near the Beacon Hill Children’s Farm area.

According to VicPD, a silver 2018 GMC Sierra was set on fire in a Beacon Hill Park parking lot. Significant damage was done to the interior of the vehicle.

The sixth recent suspicious fire took place on April 2. Officers were called to the 3000-block of Douglas Street at roughly 10 p.m. for reports of a branches and cardboard on fire on the sidewalk. No buildings were damaged as a result of the fire.

On April 5, at approximately 2 a.m., police were called to a seventh suspicious fire in a one-month period.

VicPD says that a tire rack and hedge at a Fairfield-area gas station was lit on fire. No one was injured by the fire, but police are considering the incident to be a case of arson.

One day later, on April 6, Victoria police were called to the 600-block of Pembroke Street for reports of a dumpster fire. Police say the incident occurred at approximately 10 a.m.

The ninth recent suspicious fire took place at approximately 2:15 a.m. on April 9. Officers were called to reports of another garbage can fire in the 500-block of Chatham Street. Police say that the garbage can did suffer damage in the fire.

Police are now asking for anyone with information on any of the fires to step forward and contact them.

Meanwhile, VicPD is reminding residents to secure all garbage cans and dumpsters every night. Police are also asking that any combustible materials, such as cardboard or branches, be stored away from homes and buildings.