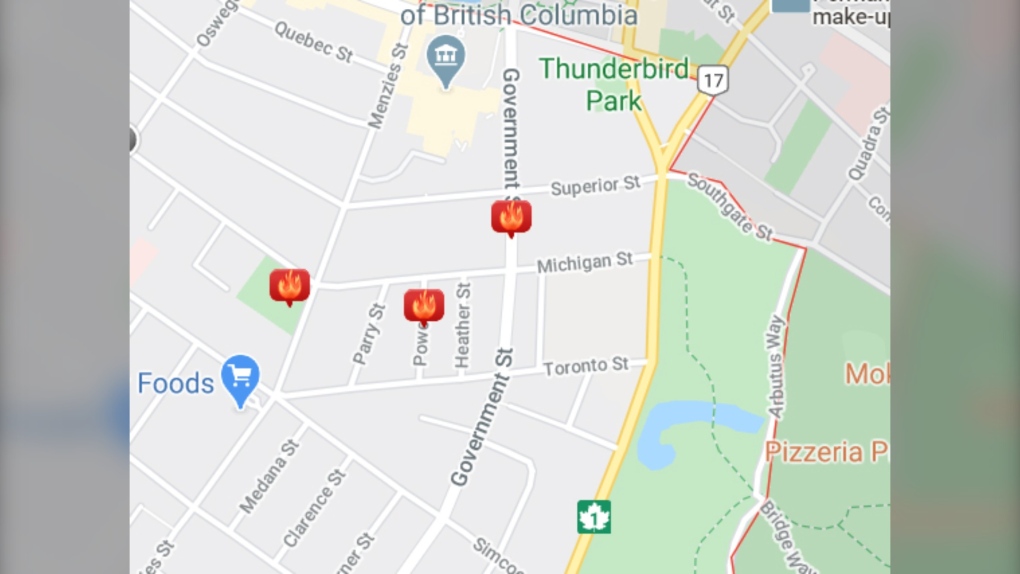 The locations of three suspicious fires, that were reported within minutes of each other, are shown: (Victoria Police)

VICTORIA -- The Victoria Police Department is asking for witnesses to come forward after three suspicious fires were lit in the James Bay overnight.

According to VicPD, the first of the three suspicious fires was reported at approximately 3 a.m. Thursday.

Officers were called to a construction bin fire near the intersection of Michigan Street and Powell Street. When police arrived, the Victoria Fire Department was already on scene and had extinguished the fire.

Police say that the construction bin sustained significant damage in the fire.

Just five minutes later, at approximately 3:05 a.m., a second suspicious fire was reported in the 500-block of Government Street.

When officers arrived, they spotted a fire breaking out on the staircase of a heritage building. Police were able to contain the flames with a fire extinguisher before the Victoria Fire Department arrived to extinguish the flames.

Minutes later, at roughly 3:10 a.m., police were called to a third fire.

Officers rushed to the 200-block of Menzies Street where they discovered a dumpster “fully engulfed in flames.”

The fire then spread to a nearby wooden fence. Fortunately, police were able to contain the flames with a fire extinguisher until firefighters arrived.

While no one was injured, police say that the three fires resulted in significant property damage.

“These fires were in a remarkably short distance of one another – about a one block radius there – and of course they occurred, each one, within about five minutes of the next,” said VicPD Const. Cam MacIntyre.

“We had a string of nine fires a few weeks ago and some other fires before that so we are concerned,” he added. “These incidents remain under investigation.”

Police are hoping to speak with anyone who may have information on the fires, as they were all sparked within a one-block radius of one another in a span of minutes.

Anyone who lives in the 500-block of Michigan Street, 500-block of Government Street, 200-block of Menzies Street or the surrounding areas is asked to check any security video between 2:30 a.m. and 3:30 a.m. Thursday.