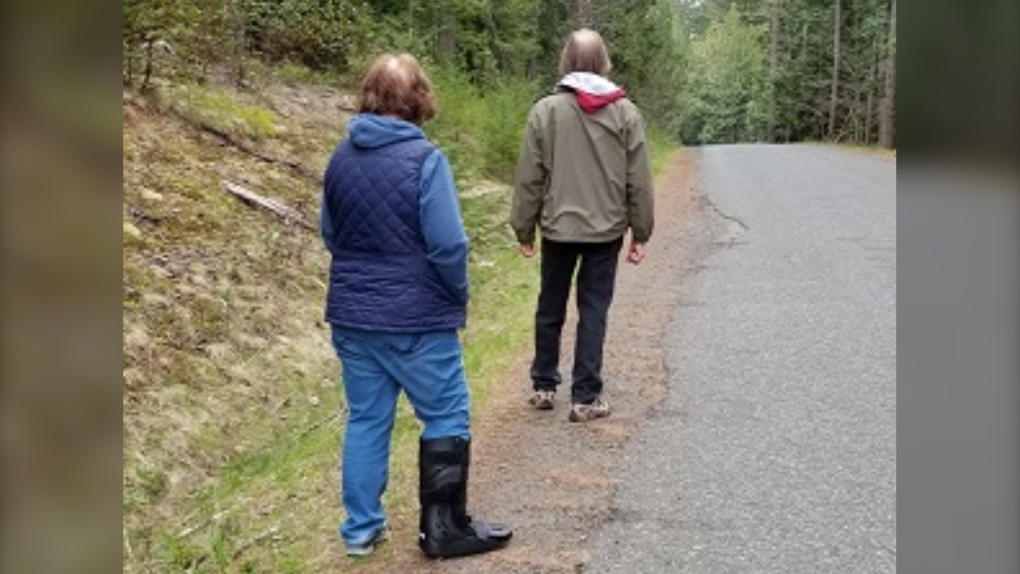 The collision happened on March 4, when a woman and her husband were walking their two dogs around 3:30 p.m. on Lorenzen Lane, near Superior Road, in Lantzville, B.C. (RCMP)

Mounties say they have seized a vehicle connected to a hit-and-run crash that sent a woman to hospital with serious injuries near Nanaimo, B.C.

The collision happened on March 4, when a woman and her husband were walking their two dogs around 3:30 p.m. on Lorenzen Lane, near Superior Road, in Lantzville, B.C.

The couple and their dogs were on the shoulder of the road when the woman was struck from behind by a black SUV, which pushed her into her husband and they fell in the ditch along with the animals, they told police.

The man managed to crawl out of the ditch and saw that the SUV had stopped a short distance from them. He yelled for the driver to help but the vehicle then sped off towards Superior Road, police said.

The man flagged down another vehicle and had the driver call 911.

One of the dogs was seriously injured and required surgery to repair its leg, while the other dog suffered bruising, police said.

"Based on where they were walking and given that the driver actually stopped the vehicle after striking them, it is inconceivable that the driver did not realize what had transpired," said RCMP Const. Gary O’Brien in a statement after the crash.

Officers with the Nanaimo RCMP's traffic unit recently attended a home in Lantzville where a vehicle was seized for forensic investigation. The owner of the vehicle was identified and provided a statement to investigators, police said in a statement on the seizure Thursday.

"The victim was notified of these developments and is grateful that the investigation is moving forward," the Nanaimo RCMP said.

"Police are also confident in saying that there are others in the community who have knowledge of this incident but for unknown reasons, they have not come forward."

No one has been charged in the collision and police continue to investigate.

Russia seemingly struggles to replenish its troops in Ukraine

As Russia continues to suffer losses in its invasion of Ukraine, now nearing its sixth month, the Kremlin has refused to announce a full-blown mobilization — a move that could be very unpopular for President Vladimir Putin. That has led instead to a covert recruitment effort that includes using prisoners to make up the manpower shortage.