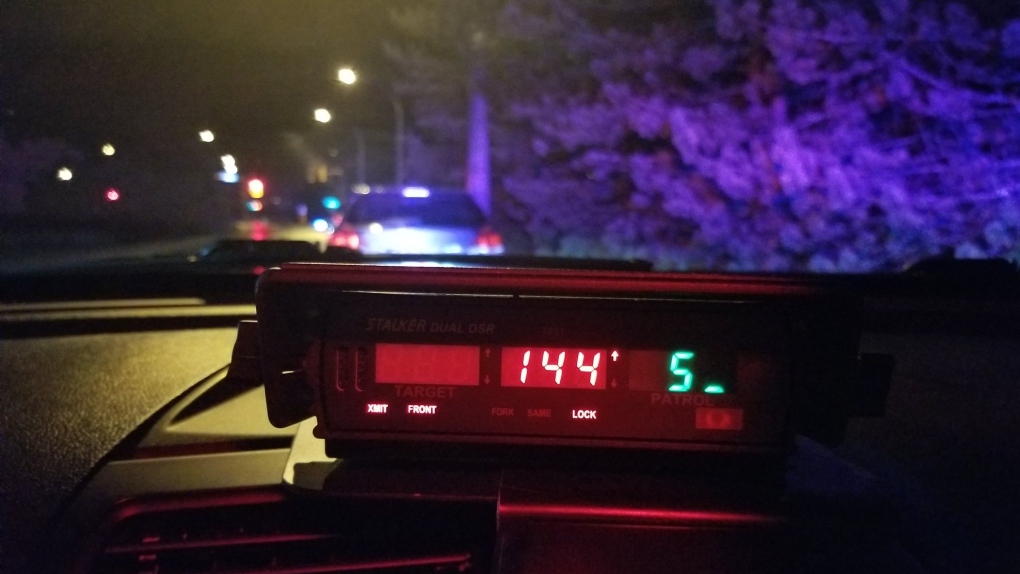 Police allege that the car was travelling 144 km/h in an 80 km/h zone. (Saanich Police)

VICTORIA -- Saanich police have impounded a car after they say the vehicle was speeding on the Patricia Bay Highway in poor weather conditions on Monday evening.

Police allege that the car was travelling 144 km/h in an 80 km/h zone while “the roads were quite wet from fresh rain.”

When officers approached the car, the driver said he thought he was “’only’ travelling at 125 km/h on Highway 17,” which still meets the criteria for excessive speeding, defined as travelling 40 km/h or more above the posted speed limit.

The driver now faces a $483 excessive speeding ticket, has had their vehicle impounded for seven days – including related fees – was served three driver penalty points and has had one driver risk premium added to their insurance.

On Monday, police departments across Greater Victoria were out enforcing traffic laws in their communities.

In Victoria, police were looking for distracted drivers, particularly those who were using electronic devices while driving, and issued 15 distracted tickets Monday.

Meanwhile, in Oak Bay, officers served seven traffic tickets at one intersection alone. Police say that five fail to obey stop sign tickets and two use of electronic device while driving tickets were issued at the intersection of Beach Drive and King George Terrace within a two-hour span on Monday.

Busy afternoon for Cst. Savoy at the intersection of Beach Drive and King George Terrace. 5 Fail To Obey Stop Sign and 2 Cell Phone tickets in 2 hours of work there. pic.twitter.com/Ju9eLXa8n4