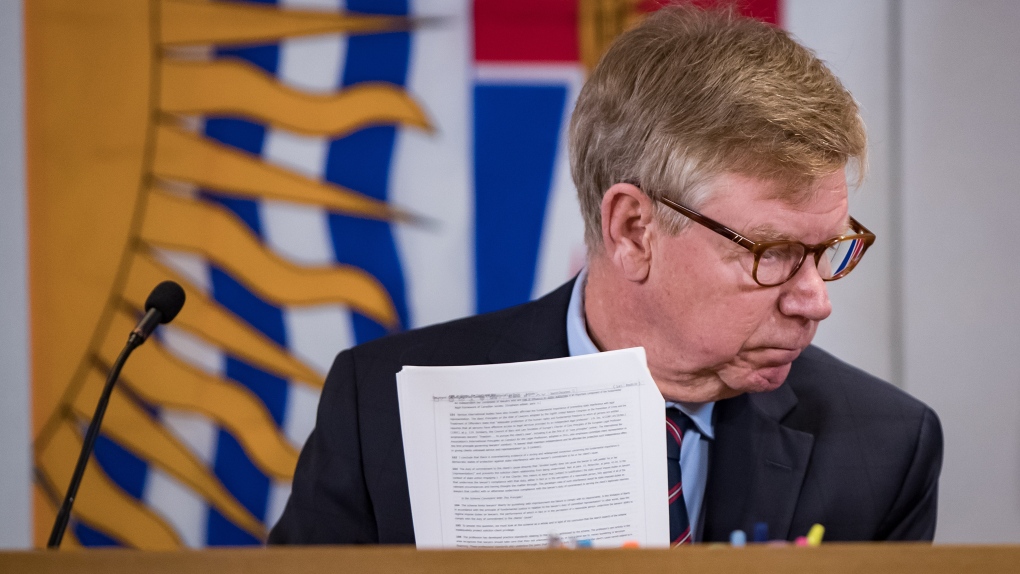 Commissioner Austin Cullen looks at documents before opening statements at the Cullen Commission of Inquiry into Money Laundering in British Columbia, in Vancouver, on Monday, February 24, 2020. THE CANADIAN PRESS/Darryl Dyck

VANCOUVER -- Metro Vancouver appears to have developed an industry with the “sole purpose” of laundering money and moving cash across borders, a public inquiry heard Monday.

Criminologist Stephen Schneider said that while criminal organizations have traditionally laundered the proceeds of crime as part of their broader operations, separate money service businesses are now facilitating them.

Schneider made the comments to commissioner Austin Cullen as the first expert witness during the part of the inquiry dedicated to an overview of money laundering and regulatory models during the next 3 1/2 weeks.

The Cullen Commission heard opening arguments in February and the main hearings in September will delve into specific industries.

Schneider's testimony is based on his review of commissioned reports, media clippings and academic studies, including his own research into RCMP investigations on money laundering.

In addition to cleaning dirty money, British Columbia's third-party businesses are also alleged to facilitate “capital flight” from China, or the movement of funds out of the country beyond the US$50,000 per-person limit imposed by the Chinese government.

It's estimate that billions or even trillions of dollars have been moved out of China against local rules in the phenomenon known as “capital flight,” Schneider said.

While those funds may not have been earned through crime, they are intermingled with criminal proceeds via third-party businesses, he said.

“This is something that is fairly new in the context of money laundering,” Schneider said.

“It's inextricably part of the so-called Vancouver model and contributed to investments in the real estate market being intermingled with the proceeds of crime.”

Broadly speaking, money laundering is a “tactical imperative” that criminal entrepreneurs, drug traffickers and organized crime have developed to avoid suspicion, he said.

“In order to enjoy the fruits of their labour they need to be able to take that cash and try to convert it into more of an asset that's less suspicious all the while trying to hide the illegal source.”

British Columbia is an attractive place to do that, he said. Not only is it near California, which is an entry point for the Mexican drug trade, but the Port of Vancouver provides a trade hub with Asia and B.C. has a homegrown marijuana industry of its own. Metro Vancouver is also home to many substance users, providing a built-in clientele, he said.

Although you might think mass amounts of money would require intricate plans to clean or conceal it, a lot of money is literally carried in suitcases across borders, he said.

Cash is still king, especially in the drug trade, and small denominations of $20 and $50 bills are most common, even in very large transactions.

“It's not unusual to have multi-kilos of cocaine or marijuana being purchased with stacks of $20 bills.”

At the same time, the digital world is creating new opportunity in the form of cryptocurrencies and even multi-player games.

He gave the example of games like “Second Life,” where in-game currency can be used to purchase virtual products or advance to the next level. That currency has real value attached and could be used to launder money, he warned.

But while there have been a small number of cases of cryptocurrencies like Bitcoin being used in the drug trade, cash remains the preferred payment.

Schneider also issued a warning that while money laundering is a problem, he believes a much bigger one exists in financial crimes.

Financial crimes like securities fraud or stock market manipulation can be harder to investigate and prosecute, and Canada “has never been very good at addressing them,” he said.

Gangs and the street-level drug trade are “low-hanging fruit” relative to the massive offences that occur within commercial crimes that may be committed by corporations and private businesses that appear legitimate, he said.

“When we think of serious crimes that have significant impact on society, we just can't think of drugs. We have to think of commercial crimes as well,” he said.

This report by The Canadian Press was first published May 25, 2020.