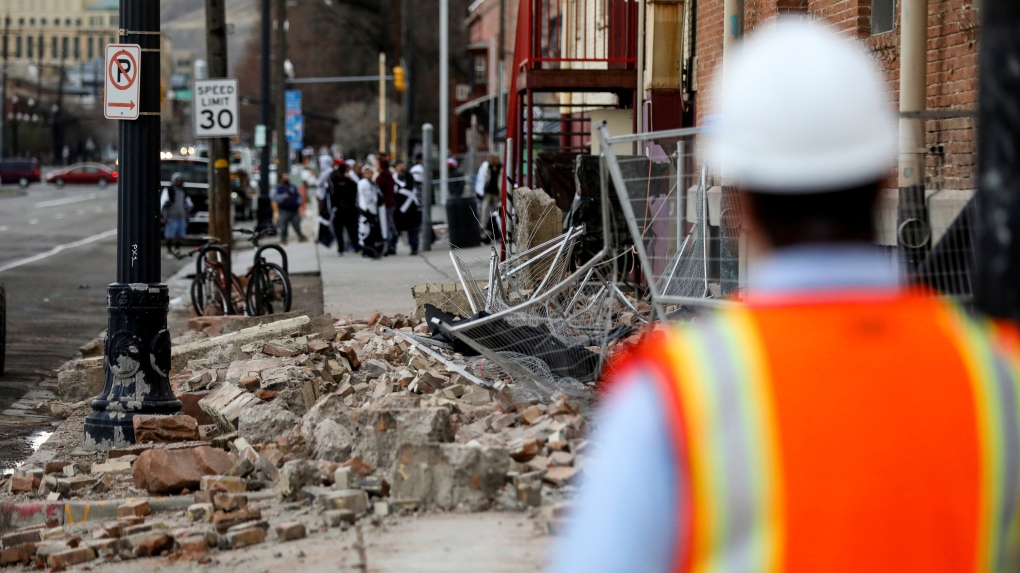 Fallen debris is seen at a building in Salt Lake City after an earthquake on Wednesday, March 18, 2020. A 5.7-magnitude earthquake has shaken the city and many of its suburbs. The quake sent panicked residents running to the streets, knocked out power to tens of thousands of homes and closed the city's airport and its light rail system. (Spenser Heaps/The Deseret News via AP)

VICTORIA -- A local earthquake expert says that a recent 5.7-magnitude earthquake in Salt Lake City, Utah – which shut down streets and knocked out power to tens-of-thousands of people Wednesday – is a good reminder for residents of B.C. to be prepared for an earthquake here.

The seismic event in Salt Lake City occurred at 7:09 a.m. Wednesday and is the largest quake the region has seen since 1992. John Cassidy, a Vancouver Island seismologist, says the quake was not considered huge but was considered serious due to its proximity to a major centre.

Cassidy says people would have felt strong shaking and that some damage to buildings has been reported. He adds that it was felt over a huge area, including all of Utah and parts of Idaho.

"Large earthquakes are relatively rare and they strike without warning so it is important to be prepared and to know what to do when shaking begins,” said Cassidy. “Drop, cover and hold on."

"Tables can move away from you in the event of a very strong earthquake, that’s why you’re holding on. Knowing what to do is so very important."

While damage is being reported in Salt Lake City, Cassidy says all the information gathered from seismic events only betters our understanding of what to expect from future earthquakes, which helps minimize potential impact.

"In Salt Lake City, the modern buildings did very well," he said.

"We’re constantly improving our building codes, our bridge codes and learning from these earthquakes so that we can be better prepared for future earthquakes that we know will happen here on Vancouver Island, here in Canada and elsewhere around the world."

"We can’t stop earthquakes but, certainly, we can be well prepared for them and minimize the impact of those events," said Cassidy.