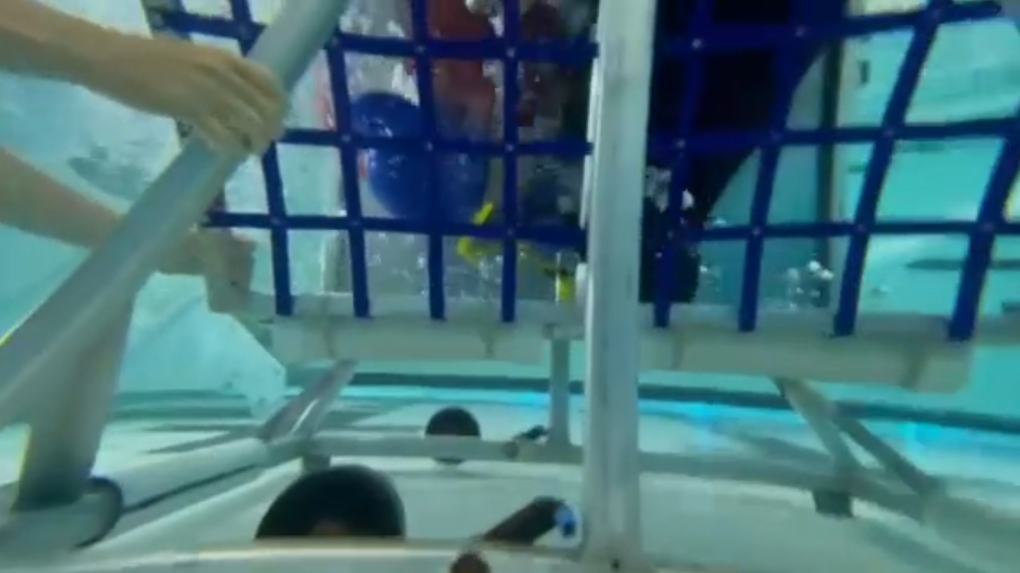 Members of a Vancouver Island search and rescue team who are used to extensive training in the air were instead practicing how to survive under water this week.

CAMPBELL RIVER, B.C. -- Members of a Vancouver Island search and rescue team who are used to extensive training in the air were instead practicing how to survive under water this week.

“The first time was a little nerve-wracking: the anticipation of not really knowing what’s going to happen,” says team member Frank Brunt.

Participants were secured into a simulator in the pool, which was then turned upside down, forcing the students to learn techniques to make their way out.

“We got to do five, six dunks, and so by the end the procedures that you follow become more muscle memory and it’s much less scary,” Brunt says.

Head instructor Shaun Glass says the courses include a three-hour lecture and then a practical session that exposes students to the possibility of what they may go through in an underwater egress situation.

Glass says the training is taken mainly by helicopter and float plane pilots, but also by people who frequently have to be passengers in float planes for their work.

“We will have passengers that maybe fly between the mainland and the island all the time and they’ll actually take the course because they fear that,” he says. “They want the best chance if they actually go down in one of the float planes that they’ll have a chance to get out.”

Glass says once 70 to 80 per cent of the students do their first dunk they actually find out it’s not as bad as they envisioned.

“Their mind is the problem, as opposed to can they physically do it,” he says.

He says the main advice he gives to students is first of all to relax, because fear is better than panic, and he wants survivors to be able to think clearly if they ever find themselves in that situation.