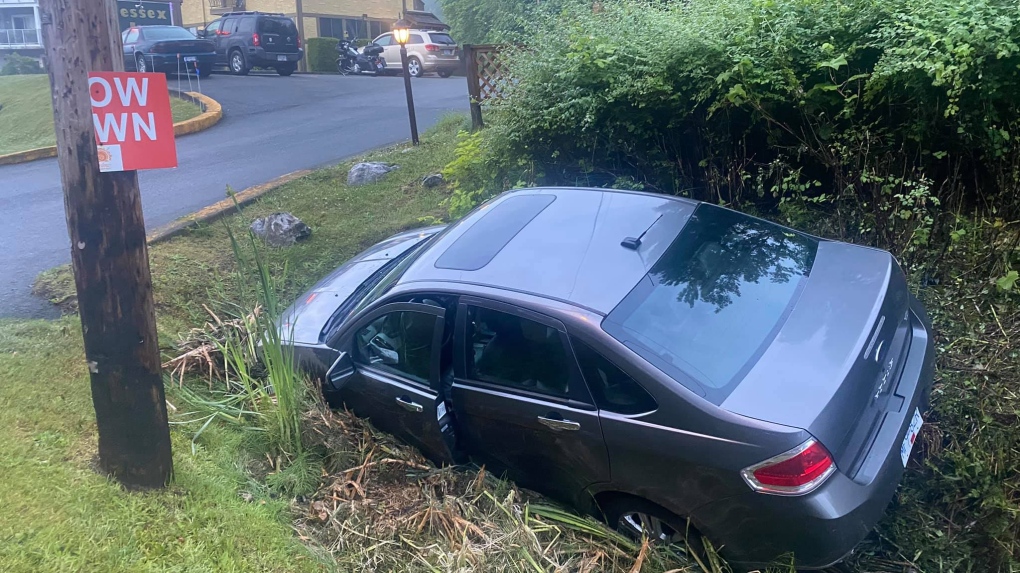 The crashed the vehicle that Campbell says he pulled over to check on is shown: (Darren Campbell / Facebook)

COURTENAY -- It was a dramatic 24 hours for a Vancouver Island man who had his vehicle stolen, then tracked down, on Monday.

His Facebook page is filled with memes about having a good heart and doing the right thing, but a Cowichan Bay man had that unfortunately backfire on him Monday morning.

In his posting, Darren Campbell talks about coming upon a crash scene on his way home from work, around 5:20 a.m., and seeing a vehicle in a ditch with its lights flashing and horn going off.

Expecting to find the worst, Campbell says he approached the vehicle, which he believes is a write-off, when someone stole his truck.

"Heard my truck start up and look at the guy in my driver’s seat with a black mask on. Make eye contact with him, almost see his grin on his face. Then he speeds away stealing my truck," Campbell’s post says.

His truck is a 2006 Ram Larime and he says it was last seen heading south through the Village of Cowichan Bay. The incident happened directly across from the Wessex Inn in the 1800-block of Cowichan Bay Road.

"If I had any luck it would be all bad luck. Like are you kidding me?" Campbell says. "Try to be a Good Samaritan and my $20,000 truck gets stolen right under my nose."

On Monday evening, Campbell told CTV News that his vehicle had been recovered.

The Cowichan Bay man says his truck was found near the intersection of Payne Road and Cowichan Lake Road near Duncan by motor bike riders.

Campbell says the vehicle seems to run well, but there may be some dings and the interior is "a mess."

"I missed out a day's pay of work but thinking positive, it could have been a lot worse" he said.