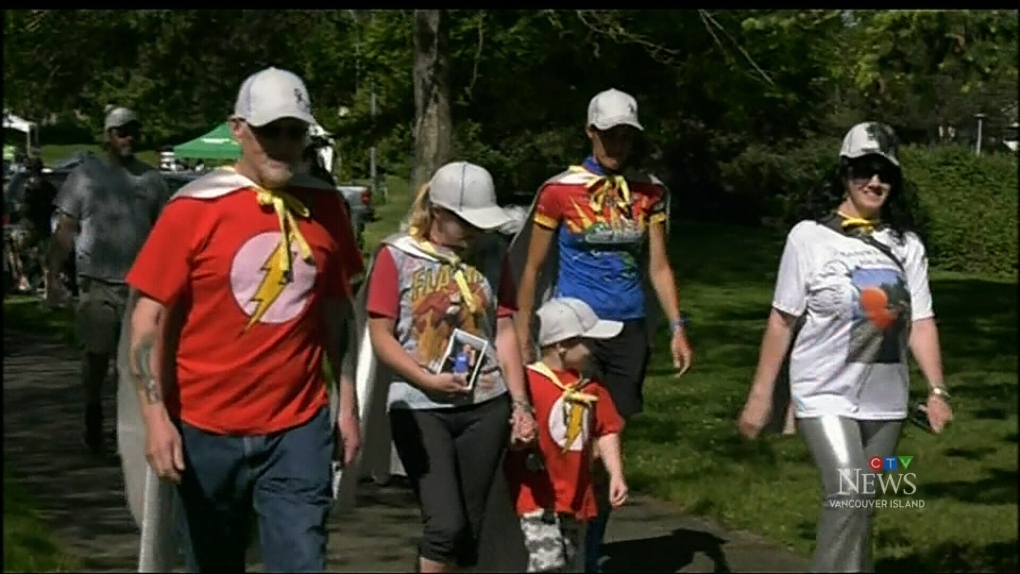 You couldn’t miss the large “K” sewn onto the shiny capes worn by a large group taking part in the 24th annual Victoria Brain Tumour Walk.

They call themselves “Kaiden’s Caped Crusaders,” and their inspiration is someone they consider a superhero of their own, an 11-year-old boy.

“Kaiden was an incredible kid, super funny, quiet on the outside but once you got to know him he’d just crack you up all the time,” said Alli Roberts, who got to know Kaiden Finley when he was her junior rider during the 2018 Tour de Rock fundraising ride.

Looking around at all the capes, Kaiden’s mother Tasha Finley appeared overwhelmed and said if Kaiden could have seen it, his response would have been, “Wow.”

Kaiden was diagnosed with a brain tumour in May 2017.

He endured surgery and six weeks of high-dose radiation. But in September 2018, an MRI revealed six new tumours.

In October, as the Tour de Rock passed through Parksville, Roberts jumped off her bike and ran to Kaiden for an impromptu hug.

The moment, which sealed the bond between the two, was caught on camera and captured the hearts of people across Vancouver Island.

As word of Kaiden’s fight with cancer became known, he was given the opportunity to fight crime as well, and was named Victoria’s police chief for a day in January.

He seemed to take to the role with relish, kicking back in the chief’s chair, feet on the desk, giving the thumbs up to camera crews recording it all.

Behind the smile, Kaiden was becoming sicker and sicker. He passed away in March.

Kaiden was unable to fulfill his dream of taking part in this year’s Tumour Walk, but his fundraising goal has been far exceeded.

“He wanted to raise $1,000. He didn’t survive to walk today so we’re walking in his honour and his team, Kaiden’s Caped Crusaders, have already raised over $5,700,” said Roberts.

The way the community has come together in Kaiden’s memory has made a lasting impression on walk organizers.

“The work that we do is not easy. And when I am part of an event like this and I see that kind of love and support and that impact that young boy has had on a community, it is very inspirational and very motivating,” said Suzanne Elliott with the Brain Tumour Foundation of Canada.

For Kaiden’s mother and siblings, the support means everything.

“It's huge, there's no words to describe how much it means to us,” said Finley.

The money goes to help those with brain tumours and Roberts said it would have made Kaiden very happy to know about all of the donations.

“He would say it’s awesome because all that was important to him was that no other child have to go through the experience that he went through.”